STRAWBERRIES and cream were on standby as a team of elderly care home residents took to centre court yesterday – on Wii Tennis.

Pensioners at Marionville Court Care Home donned their whites to get in some tennis practice on the home’s new Wii console for their own ‘gran slam’ in the run-up to Wimbledon.

All council care homes have been fitted with the next-generation console to ensure OAPs get healthy spells of entertainment and exercise.

Elaine Heath, manager at Marionville Court Care Home, said that the consoles had proved a hit among residents at the home.

She said: “It’s important for older people to exercise regularly for both their mental and physical health.

“This shows them that computer games are not just for their grandchildren, as well as giving them a healthy dose of street cred.”

Made by Nintendo, the Wii consoles have been hugely successful in getting older people and families to get involved in computer games.

Exercise game Wii Fit has sold almost 20 million copies worldwide, and the sports version itself has shifted more than 40 million.

Both have been praised for their easy-access approach to gaming, and as a result are hugely popular with people of all ages.

Care home resident Betty Heaps, 70, said: “I think the Wii is fantastic, there are so many different games to play, but I do love the tennis.

“We’re having a Wimbledon day as we’re looking forward to the start of it next week – I’ll have to make sure I don’t wear myself out before the final!” 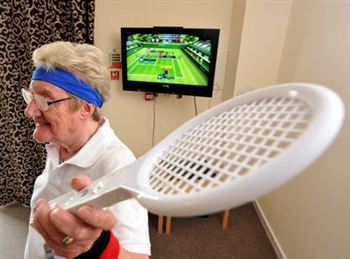 Ageing ace Roderick McCuaig, 80, added: “This is only the first time I’ve played it, but I like this game, you could really come to look forward to it and enjoy it.

“I think this is something I’ll use regularly, if I can get a turn – I think there’s going to be quite a queue.

“I’m looking forward to Wimbledon – I really enjoy the big matches, tennis is a great game to watch.”

Councillor Norman Work, vice-convenor of health and social care for Edinburgh City Council, tried his hand at a few GAMES of Wii tennis.

And he concluded that the Wii consoles are a smash.

He said: “I am delighted that we are putting Wiis into our care homes.

“It is very important that we are constantly changing and developing the services we provide to our residents and I’m sure they would all agree this is a very popular addition.”