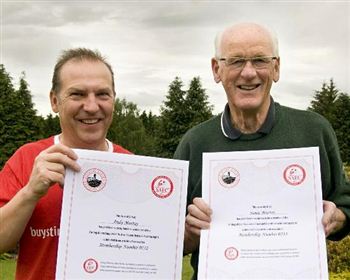 Ahead of his opening Wimbledon match today (Tuesday) the hotly-tipped Scot pledged his support to a supporter-led takeover of Stirling Albion.

Despite being Hibernian fans, Andy and his older brother Jamie signed up to the “Buy Stirling Albion” campaign to save the team from obscurity.

Their grandfather Roy Erskine played for the Binos in the 1950s and 60s.

But now 134 years of footballing history hangs in the balance unless someone stumps up £800,000. The club has been for sale for three years without anyone showing any interest.
Now a retired optician, Roy, 77, sent his famous grandsons a letter pleading with them to temporarily put aside their green and white Hibs scarfs to back Stirling.

And because Stirling Albion are, geographically, the Dunblane siblings’ local team, they couldn’t say no.

They joined an ever-growing list of celebrities and sporting greats, including Real Madrid star Ronaldo and TV chef Gordon Ramsay, who have agreed to help promote the chance for fans to buy a stake in the club.

Now Roy’s planning to send some Stirling Albion shirts down to SW19 for his boys to sport in front of the world’s cameras.

He said: “I spoke to Jamie and told him what was going on with the Buy Stirling Albion campaign and he immediately called Andy and they both were happy to lend their support to this important community project.”

He said: “Roy had a great spell playing for the club so it’s in his heart and clearly Andy and Jamie were delighted to help the cause.

“If we can encourage enough supporters to join, they will each get a say in what happens in the club.

“It’s fantastic to have the whole Murray family signed up as members. Jamie is already a Wimbledon champion and Andy is a sure future world number one.

“Nobody wants to see Stirling do a Gretna, so there needs to be a fresh direction to take this forward and save the club.”

The campaign offers fans the chance to become part of the first ever 100 per-cent fans’ owned football league club in the UK for just £40 with a guarantee that if the bid fails they will get £35 returned to them.

Mr Goodwin said the club was at risk of going out of business with spiralling costs and little sign of any investment. Formed in 1945, Stirling Albion finished in 5th position in Scotland’s Second Division this season.