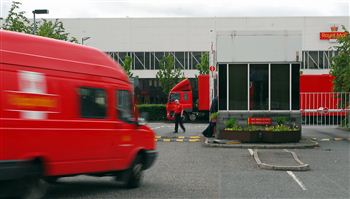 MANAGERS at a Royal Mail centre are facing disciplinary action after thousands of undelivered letters were found dumped in a trailer on the site.

Bundles of post were found stashed away in an articulated trailer parked in the grounds of the Sighthill in Edinburgh depot last September.

Although the Royal Mail won’t confirm a figure, it is thought to be around 20,000 pieces of post are involved.

It is being speculated that the post was hidden away to make it easier for the depot to hit their delivery targets, which they get paid a bonus for.

Five managers have been investigated in connection with the incident.

Royal Mail bosses declined to comment on the incident or the nature of the allegations against the managers.

They said it was an “internal matter” that they were dealing with.

But sources at the centre say that the investigation is being swept under the rug to public finding out.

One source said: “Everyone was sworn to secrecy over this under threat of disciplinary action. The bosses didn’t want the public to know about it.

“They would rather it all just went away.”

And another said: “If a postman had been hoarding letters and failing to deliver them then they would be dismissed, as had happened in the past, and rightly so. They would’ve also faced criminal charges in the courts.

“No-one will lose their jobs over this.

“There’s a lot of pressure on the managers to meet delivery targets within the Royal Mail. That’s what their bosses are interested in.”

It is understood that independent auditors visited the depot last year and found that thousands of letters had gone undelivered. Postal workers claim that computers were taken away for closer inspection.

A spokesman for the Communication Workers Union (CWU) said: “We are aware that a matter was being dealt with internally.”

A spokesman for Consumer Focus Scotland said it was damaging for the Royal Mail.

He said: “While we can’t comment on decisions about staff, it’s important for Royal Mail’s image and reputation that the same high standards are expected of every member of staff whatever their role in getting the post to people’s homes and offices.”