SCOTS shoppers could soon be quids in when they see a return of wonky vegetables to supermarket shelves tomorrow.

An EU ban on the sale of misshapen fruit and veg will be lifted tomorrow (Wed), with some stores already vowing to slash costs with bargain bags of barmy veg.

Sainsbury’s is hailing Wednesday as the day the “wonky veg war” was won. 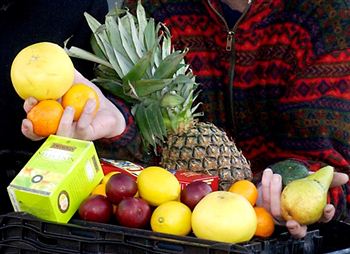 And Scottish farmers are hoping that they can share the spoils with shoppers too.

Curly carrots and cucumbers will be back on the shelves in a move promising to see some produce prices cut by up to 40 per-cent.

And the new rules will see less food thrown away before it’s sold, according to Aberdeen Agricultural College food marketing expert David Lamb.
He is now tasked with ensuring farmers get a fair deal on any increased sales of fruit and vegetables.

He said: “Consumers are intelligent and never needed this ridiculous regulation in the first place.

“Scotland’s veg can’t be beaten and no matter what it looks like the majority of it tastes terrific and is hugely healthy.

“I think the EU got a bit over fascinated by regulation, when really all it did was increase unnecessary waste.

“Now my job is to make sure the farmers don’t miss out on cost savings or increased sales, which is a complex job but a very important one.

“The Scottish agricultural industry very much welcomes the move to legalise healthy food, no matter what it looks like.”

Cucumbers were the first vegetable targeted by the European Commission (EU) in 1988 when they ordered all member states to ensure every single piece on sale met a raft of conditions.

Other vegetables quickly followed, with new rules for dozens of vegetables being rolled out into the 1990s.

But tomorrow the legislation will be lifted on 26 foods, including: onions, melons, apricots, aubergines, sprouts, cauliflowers, cherries and courgettes, among others.

And there will be a loosening of rules on another 10 types of produce, including apples, citrus fruit, kiwi fruit, lettuces, peaches and nectarines, pears, strawberries, sweet peppers, table grapes and tomatoes.

The commission says farmers will now be allowed to sell wonky versions of these providing they are labelled: “products intended for processing.”

Sainsbury’s had been lobbying Brussels politicians to reverse the ban, and claimed they had “won the wonky veg war.”

Lucy Maclennan, Sainsbury’s Produce technical manager said: “We are delighted to have played a part in winning the wonky veg war against these bonkers EU regulations.

“We hope that by being able to sell more wonky fruit and veg we can help cash-strapped Britons save even more on their weekly shop and help farmers use more of their crop.”

His firm, The Whole Shebag, delivers organic products to homes and businesses across the capital.

He said: “After originally dismissing organic food as a fad, it’s as if now the supermarkets are coming back around to jump on the bandwagon.

“At one point the EU was trying to regulate the curve of a banana, and that for me was when it got crazy.

“People are suspicious as to why all the carrots in supermarkets are poker-straight; they don’t want to eat pesticides.”

Food and Farming Minister Jim Fitzpatrick was quick to add his support to the celebrations, saying the change will make it easier to eat five-a-day.

He said: “The new marketing regulations will help supermarkets and greengrocers label their fruit and vegetables correctly, and will provide more choice for people who aren’t bothered by what shape their five a day comes in.

“It also means that producers and suppliers won’t be stuck with as many leftovers, so there’ll be less food waste.”