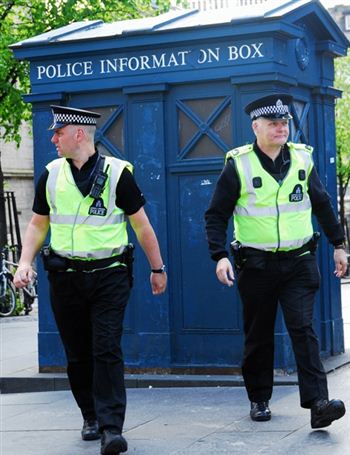 CALLING the cops is getting harder than ever – because they keep losing their mobile phones.

Bungling officers at forces across Scotland have lost 21 mobiles in the last five years.

Over £1,600 worth of mobiles have been lost by the plods in Strathclyde alone, while one officer in Central Scotland had his £60 device stolen off him.

Now calls are being made for police to be given fewer gadgets so they can catch criminals without fear of losing their gear.

With cops carrying more kit than ever, Labour’s community safety spokesman Paul Martin called on a review to lighten the load on each officer’s back.

He said: “They must feel like they are going on holiday, constantly checking if they’ve got everything, and that should not be the challenge.

“The challenge is chasing criminals, but I think they are being weighed down and asked to carry far too much.

“The vests they wear are jam-packed with phones, PDAs, notebooks, CS spray, handcuffs, truncheons and torches, so it’s no wonder things go missing.

“There’s obviously no excuse for losing a laptop, but they need to keep the kit to a minimum to avoid these clear security risks.”

The phones hang-up comes as Scots cops’ ears are already ringing over an embarrassing array of vanishing laptops and memory sticks.

Figures released under the freedom of information act show one laptop computer has been missing for four years from Lothian and Borders police, who are missing three in total.

But they have officially given up looking for them, insisting there was no risk because the secret data within the machines was password protected.

And Strathclyde police revealed they didn’t even know one of their USB sticks had disappeared until a member of the public handed it in.

The gadget, worth £10, held a copy of a confidential police report to the Procurator Fiscal and was found lying on the ground in a car park in Glasgow’s Crookston area on March 20.

The force said: “A full investigation was carried out into the circumstances surrounding the lost equipment and as a result no evidence of criminal intent and no compromise of the data contained on the equipment was found.

“It was concluded that the loss of the equipment was a genuine mistake by the member of staff concerned.

“A full procedural review of the handling of this type of equipment within the department concerned has been completed and procedural changes implemented to ensure it does not recur.”