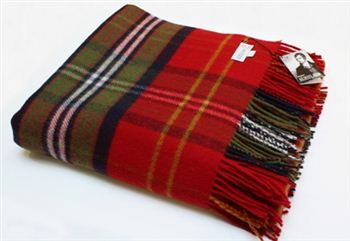 A new tartan has been created to honour the 250th anniversary of Robert Burns’ birth.

The patterns will feature colours that represent his most famous poems, and it is hoped that money from the special tartan will go towards a museum to celebrate his life.

The collection includes two scarves and a travel rug made from lambs wool and cashmere, with one pound from the sale of each item going towards the building of the National Trust’s Robert Burns Birthplace Museum in Alloway.

The brightly coloured tartan is inspired by motifs in Burn’s poetry.

The dominant red suggests A Red, Red Rose, while blue and green accents recall The Blue-Eyed Lassie and Green Grow the Rashes.

The tartan also includes strands of grey and soft green, both of which are featured in a tartan created by Johnstons in 1959 to commemorate Burn’s bicentenary, and are meant to represent a link with the past.

He said: “Johnstons of Elgin is an iconic Scottish brand with a fantastic heritage and cutting-edge fashion focus.

“So naturally we’re delighted that they’ve stepped forward to help contribute towards the new museum in such an inspiring way.”

Founded in 1797, Johnstons of Elgin has most recently been nominated in the category of Textile Brand of the Year at this year’s Scottish Fashion Awards.

“A great deal of consideration was given to the design process, which is reflected in the colours, pattern and fabrics used to make each Anniversary Check product. “

At a cost of £21million, the Robert Burn Birthplace Museum is the most ambitious project ever undertaken by the National Trust.

Due to open in 2010, the new building will house more than 5,000 artefacts from the world’s most important Burns collection, and will feature an exhibition space more than double the size of that in the current museum.

Royal Highland Show to be livestreamed for 200th anniversary