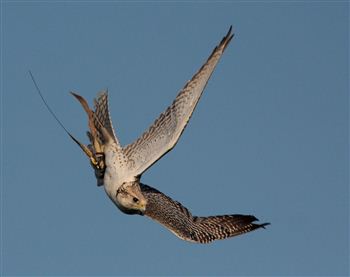 A DEAL to hire hawks to rid the Scottish Parliament of its pigeon poo problem is costing the taxpayer a staggering £2000 – for every bird they chase away.

NBC Bird and Pest Solutions have signed a lucrative £44,000 three-year contract with Holyrood bosses to have their birds of prey patrol the skies to chase off the doos.

But handlers admit they think there are only around 20 birds posing a problem – making it a very costly solution to the public purse.

NBC’s area manager for Scotland  Ian Cain – who will also be flying the birds from the Parliament – said: “We have not seen any more than 20 pigeons on the building itself.
“Displacing that many is not going to cause a problem elsewhere given the number of pigeons across Edinburgh.”

He added: “The 20 or so that have decided to live on the parliament building are not going to be noticed in the thousands across Edinburgh.”

Parliament chiefs advertised the £44,000 deal to bring birds of prey to the £414m building only recently and concluded the deal after complaints by MSPs about smells and droppings left by the feathered pests as well as the failure of measures like netting and metal spikes.

Four Falcons and three Hawks will be flown five days a week and 12 hours a day by up to five falconers to scare off the pigeons at Holyrood.

Following a successful £4,000 month-long trial in August last year, the Parliament decided to give the move the go-ahead.

However there is a strict no-kill policy included in the contract and the birds will instead be used to frighten away the pigeons.

Mr Cain said he and four other falconers will fly the birds from Wednesday, July 15 in a five day intensive campaign.

He said: “From our experience we need to make sure our birds of prey are seen as part of the fixtures and fittings and the way that we do that is a very intensive period of control.”

Mr Cain said after this five-day blitz, the flights will drop to three times a week for a month and eventually twice per week.

And he added he is confident his birds will not actually hunt the pigeons.

Mr Cain said: “All the birds that we use for bird control are not used for hunting at all. We take them from a very young age so that they are trained that their food comes from us and not from hunting pigeons.”

He said the company have a good record of scaring off birds without fatalities from places like Hampden Park and the National Galleries in Edinburgh.

A Scottish Parliament spokeswoman said: “We have decided to use this falconry service to help us deal with the on-going problem of pigeons.

“We have had some success with our anti-roosting measures, including spikes and nets, and we are now in a position to look for a longer-term solution to deter pigeons.

“As with our successful month-long trail last year, we will operate a no kill policy. The birds of prey have been brought in with the main aim of displacing pigeons from the Parliament building and deterring them from returning.”

The spokeswoman added that as the problems decreases the parliament hope to save money on the £44k contract.