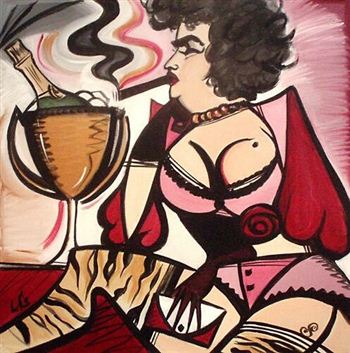 A FRENCH artist who painted Susan Boyle as a saucy cigar-smoking sexpot has received death threats by fanatical Americans.

Laetitia Guilbaud was left “very scared” after being targeted in a hate campaign run by fundamentalist Christians from Texas.

The 24 year-old had to call in the police after 200 sick hate letters from furious SuBo fans who said she should be “crucified” for depicting the Scots singer as a sex kitten.

The artist, who insists she is a SuBo fan, said: “When I read the first few emails I was very scared. Some of them were threatening me.

“I one week I got thousands of blog hits and emails. About 200 were sick. They came from Texas.”

One of the emails said: “This work is a mean depiction of a precious child of god.

“The artist should be crucified.”

Another read: “Susan is an angel. She would never behave in this way. Guilbaud should look to God and pray there is no retribution.”

The painting is due to be unveiled at the ArtDeCaf in Glasgow later this month, along with her notorious image of SNP deputy leader Nicola Sturgeon.

Laetitia added: “My artwork was never intended to insult or be hurtful.

The £1500 painting is available to purchase on the ArtDeCaf website, but will hang on the gallery walls for the summer.