Fallen firefighter was filling in for pal

Brave Ewan Williamson, 35, from Edinburgh, was covering for a mate and should have been enjoying a day off instead of risking his life as an inferno ripped through an Edinburgh pub.

Over 70 firefighters helped tackle the blaze at the capital’s Balmoral Bar, in Dalry, after answering an emergency 999 call at 12.38 on Sunday morning.

Ewan and a colleague, who were stationed at the city’s Tollcross station, entered the burning pub but tragedy struck within a few minutes as the floor gave way plunging both officers into the burning basement.

Courageous Ewan died at the scene and his fellow firefighter was rushed to the city’s Royal Infirmary to be treated for severe smoke inhalation. 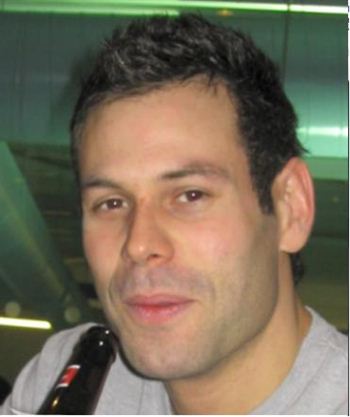 Yesterday, (Mon) floral tributes were piling up near to the scene as family, friends and colleagues arrived to pay their last respects.

Grieving fellow fire officers from the Red Watch at Tollcross fire station arrived around lunchtime and laid a large bouquet before honouring their dead comrade with a minute’s silence.

It has now emerged kind-hearted Ewan, nicknamed Scooby, had stepped in as cover at the last minute to help out a friend who managed to get himself a ticket for the T in the Park music festival.

A close family friend said: “Ewan shouldn’t have been working on that shift. That’s just the kind of guy he was. It’s just what Ewan would do.

“But nobody would have expected anything like this to happen.

“His mum is devastated, as are the rest of his family. He was a lovely, friendly, fantastic kind of guy. A gentleman – that’s the best way to describe him. 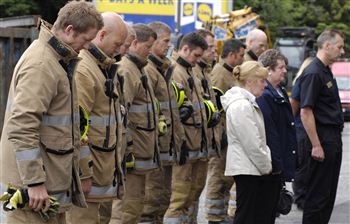 “We are all just devastated that this has happened to somebody as nice as him.”

A talented basketball player with the Wester Hailes Phoenix Basketball Club, an online tribute website has also been set up in Ewan’s honour and messages of condolenence have been posted by friends, colleagues and teammates.

One firefighter, Jerry Daily, simply wrote: “An all round good egg. Always the best that are taken.

“Thanks for being there to do the job well. From another firefighter, Jerry.

Friend Linda Wood posted the message: “Ewan, I cannot believe you are gone and we will never see you again. You were one of the best.

“My heartfelt sympathy to your family and girlfriend. You will never be forgotten. Love, Linda.”

And David S said: “Always smiling, always laughing on and of the court. You’re a gem of a guy. Deepest sympathy to all family and friends, farewell Scooby and I too salute you.” 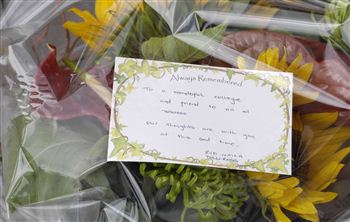 They said: “basketballscotland regret to announce the tragic passing of Ewan Williamson on Sunday morning. Ewan was a member of Whec Phoenix Basketball Club and lost his life while on duty with Lothian and Borders Fire Service.

“Ewan will be sadly missed by his teammates and the basketball community. Our condolences go to his family and friends.

Lothian and Borders Chief Fire Officer Brian Allaway made his way around all the fire stations in Edinburgh yesterday (Mon) to offer his support to officers on duty today.

Ewan Williamson is survived by his mother Linda, two sisters and his girlfriend.

A bit dim? Cops on call out caught without their headlights on