HUNDREDS of fire-fighters are to form a silent guard of honour for their fallen friend and colleague Ewan Williamson as they line the route of his funeral cortege next week.

Lothian and Borders Fire and Rescue Service plan to mark the loss of the 35-year-old fire-fighter with Full Service Honours next Wednesday.

The emotional gathering will come little more than a week after brave Ewan died helping to tackle a ferocious pub blaze in his adopted hometown of Edinburgh.

He died in the very early hours of Sunday morning when a floor at the Balmoral Bar on the city’s Dalry Road collapsed on top of him as he and his colleagues tackled alcohol fuelled flames in the basement, helping to save 20 people including a baby in the process from flats above.

Today the full extent of the devastation could be seen for the first time with the entire burned out lounge sloping towards the basement among the charred debris.

Senior fire officers comforting Ewan’s grief-stricken family were helping to finalise plans for a service fit for a hero to ensure that their wishes are followed while still allowing for the huge outpouring of grief that has washed across the city.

A lone fire engine is expected to carry his coffin along its final journey to a church where his friends, family and his beloved girlfriend will gather to say good-bye.

Colleagues from his watch at Tollcross Fire Station are thought to have been asked to honour him one last time and act as pall-bearers at the service.

It was hoped friend Oliver Carrigan, who was injured but survived the same floor collapse that saw Ewan killed, may also be well enough to attend.

Chief Fire Officer Brian Allaway is expected to lead tributes to the first fire-fighter to have died in the line of duty in the Brigade’s distinguished 185 year history.

The service will be organised to coincide with the time of day when call-outs for the Brigade are usually at their lowest.

Retained fire-fighters will also be asked to go on duty from other stations to allow as many of the 1293 staff, including its 794 wholetime fire-fighters, to attend the service.

But the focus of the day will centre around Ewan’s memory and the chief mourners; his mother Linda, sisters Becky and Rachel, and his doting girlfriend Lynsey who earlier left a photograph of them together at the scene. 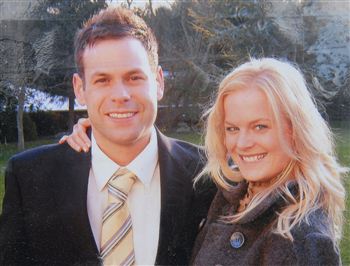 It was accompanied by a hand-written message which read: “Ewan, what am I going to do without you.

“My hero. Did you have to be everyone elses! Love you forever babe.

“You better look out for me. Yours Lynsey.”

They plan to hold a smaller private service for close friends and relatives in his home town of Kinross in Perthshire on Wednesday before moving onto Edinburgh.

Today a special canopy was erected by workers at the scene to shield a growing floor of flowers laid in tribute to the tragic fire-fighters by relatives, colleagues and strangers humbled by his sacrifice, from the rain clouds gathered overhead.

Messages from some of those rescued from the flats above where the blaze broke out were among those to praise Ewan and his colleagues.

One resident, Alexis Leal, 24, had been trapped inside the building in “complete panic” when she made a desperate call to her mother.

In a touching tribute her grateful mum Rosamaria wrote: “Thank you for saving my daughter’s life.

“She’s 24 years old and wishing to live life to the full.

“She was in the last floor of the building in complete panic.

“You made a great difference to our lives.

“A fire-fighter rescued her and she hugged him with great love.

“Forever we will be grateful to you and all your colleagues and pray for you and your family forever.”

Another message tied to flowers from a couple living in a flat affected by the blaze called Mark and Rebecca read: “We owe our lives to the bravery and dedication of the Lothian and Borders fire-fighters on duty last night.

“Our prayers and sympathies are with Ewan Williamson’s family and friends.”

* Anyone wishing to make a donation to The Fire Fighter’s Charity can do so by clicking the link HERE.

Ewan to be honoured by world’s firefighters