BELEAGUERED Livingston FC owner Angelo Massone has been banned from driving for a year after he was found slumped drunk over the steering wheel of his car in the early hours of the morning. 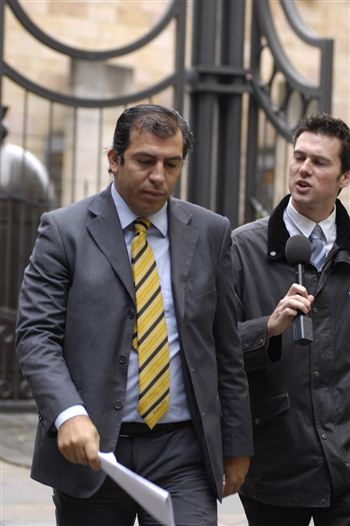 Mr Massone, 38, fell asleep in his car on a busy Edinburgh street following a night drinking at a restaurant.

A worried taxi driver called police and an ambulance after seeing the football boss passed out in his 58-reg vehicle.

Cops tried to wake Massone and found a strong smell of alcohol on his breath. When they asked him to step out of the car he was unsteady on his feet.

But over three hours later, after officers gave him a sheet explaining the situation in Italian, he confessed he could speak English and gave a sample.

Although hours after first being found in the car, he was still over one and a half times the legal driving limit.

And at Edinburgh Sheriff Court he admitted being drunk while in charge of a vehicle on November 29 last year.

Massone was banned from driving for a year and fined £800 by Sheriff Mhairi Stephen.

Following the hearing, Massone said: “It was a personal matter, it was a drinking charge and today I decided to plead guilty and for this I apologise.

“It was my wrong and I apologise.”

Fiscal depute Lisa Welsh had earlier told the court a taxi driver spotted Massone in his car at around 3.30am on Bonnington Road in the Leith area of the capital.

Miss Welsh said: “He saw Mr Massone’s car stationary but with the engine running and the window down. The driver noticed Mr Massone in the driver’s seat with his head slumped against the steering wheel.”

The worried cabbie called police and an ambulance and officers soon arrived at the scene.

Miss Welsh said: “The police officers approached the car and noticed the driver appeared to be asleep. Wakening him, they detected a strong smell of alcohol on his breath.

“They asked him to step out of his car and noted he was unsteady on his feet.

“He said he could not talk or understand English and refused to give a breath specimen.”

The officers arrested Mr Massone and took him to St Leonard’s police station where an interpreter was provided. Massone was also given a sheet explaining his rights in his native tongue.

Miss Welsh said: “He threw the sheet on the ground and said it was not needed. At about 6.45am he admitted he fully understood English and gave two specimens for analysis.”

Although this was over three hours after he was found, the lowest of these registered 59 microgrammes of alcohol per 100ml of breath – the legal limit is 35 microgrammes and Mr Massone was cautioned and charged.

His solicitor Graeme Clark said his client’s English had been improving since he moved to Scotland in June last year and he now speaks “English in conversation”.

Mr Clark said Mr Massone had been a restaurant and had planned to get a taxi home before returning for the car the next day.

He said: “His intention was to leave the car and take a taxi home and return the following day to retrieve the car. He had been at a restaurant and he felt unwell when he was staying in the car that is why the window was open.”

Mr Clark said Mr Massone held an Italian driving licence and had no previous penalties or any criminal convictions. He also added that, while Mr Massone was not currently making any money from his football club, he was a qualified solicitor in Italy and could pay a fine.

“He derives no income from the football club at present but he is a qualified solicitor in Italy and has funds from which he can pay a financial penalty.”

But Sheriff Stephen said it was likely that Mr Massone had more alcohol in his system than had shown up in the breath tests.

She said: “Clearly the circumstances indicate that you must have consumed a significant amount of alcohol when you decided to get into your car and when you were seen in the car at about 3.30am by the passing taxi driver.

“Certainly the lower reading is 59 per 100ml and I think it is fair to say that that is likely to be lower than the actual alcohol consumed which we will never know.”

Sheriff Stephen added: “Having regard to the seriousness of the consequences of alcohol and the use of a vehicle I think this is an appropriate case for disqualification.”

She disqualified Mr Massone, of St Bernard’s Crescent, Edinburgh, for one year and fined him £800. Sheriff Stephen said the fined would have been £1,000 if Mr Massone had not pleaded guilty.

He has until August 27 to pay.