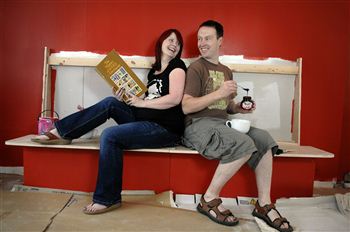 A TRIBUTE to the Scots inventor of footie fans’ favourite drink Bovril has been opened in his hometown.

Butcher John Lawson Johnston came up with the meaty recipe around 1870 which has since gone on to fame across the world.

Now Johnston’s birthplace in Roslin, Midlothian is to be turned into a permanent tribute to the man with the opening of the Bovril Johnston’s Coffee Shop.

The shop, which was once owned by Johnston’s family, will sell the famous drink along with other dishes which will incorporate Bovril into the recipe.

The brainchild of Dr Aimee Tilley and her husband Paul, the shop will open next week.

Dr Tilley, 37, a former molecular biologist, gave up studying tropical disease at a nearby vet school to look after her young family and is now hoping to resurrect the name of the man who has been all but forgotten.

She said: “Opening up my own café was always something I wanted to do. We noticed a plaque on the wall outside dedicated to Johnston, but it was all very low-key.

“This is a great way of bringing him to life and reminding people he was from Roslin.”

The beef tea is a favourite of football fans up and down the country as they brave the winter elements on the terraces.

It was the only beverage Ernest Shackleton’s team of explorers had to drink when they were marooned on Elephant Island during the Endurance Expedition in 1916.

And the beef extract is also reputedly served up at the exclusive private social club, the Groucho Club in London.

Dr Tilley admits the drink is an acquired taste but is determined to introduce it into her new menu including salad dressings.

She added: “It’s a bit like Marmite – you either love it or hate it.

“But the café is more about the inventor than the product itself.

“The local residents have been fantastic and many of them have brought me old photos of members of Johnston’s family.

“Bovril Johnston’s Coffee Shop will not only be a much needed coffee shop but a slice of local history.”

Dr Tilley and her husband, who are expecting their third child in October, were given a helping hand to set up the business by Midlothian’s Business Gateway.

James Simpson, a start-up advisor, said: “The opening of Bovril Johnston’s Coffee Shop is another important step in the development of the village as we also recently helped re-generate one of its hotels.”