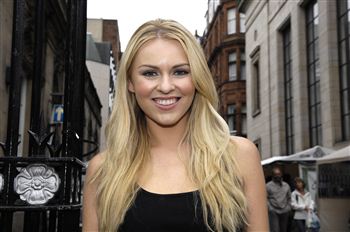 DANCING on Ice star Zoe Salmon has revealed that she has auditioned for a role in a major Hollywood film.

The 29-year-old former Blue Peter presenter is nervously awaiting on news about how she did after travelling to Los Angeles to bid for a part in a “huge movie” – but says she is sworn to secrecy about which film it is.

She said: “I did my first Hollywood audition about 10 days ago – it’s a huge movie.

“I’m not saying because I don’t want to jinx it – no one has found out about the parts yet – but it’s absolutely huge – big budget.“I’m dying to tell everyone – but I’ll tell everyone when I find out.”

Zoe – who was in Edinburgh yesterday (Tuesday) for the opening of the new Virgin Media store on Hanover street – says she’s got her heart set on acting.

And the Rangers mad lass from Bangor, Northern Ireland, reckons she’ll get there in the end.

She said: “I’ve been working with Zoe Tyler on my vocal techniques and I auditioned for the upcoming production of Legally Blonde II in the West End.

“I made it to the final two but I didn’t get it in the end.

“It was great because I’m not a singer-dancer-actor or stage school baby – I was quite flattered that they wanted to see me.

“It was amazing meeting all the Broadway team and the producers.

“I grew up a complete thespian, belonging to the local opera society and I did a lot of dramatics and panto at Christmas and musical theatre.

“I wouldn’t mind doing some musical theatre – and Broadway would be the ultimate wouldn’t it?

Far from being having a background in acting, the former Miss Northern Ireland studied law and qualified as a solicitor.

And in 2008 she was voted number 20 in FHM’s 10 sexiest women. Just a few months later the blonde beauty came fifth in Dancing on Ice with American figure skater Matt Evers.