THE smell of burning rubber filled the air in Edinburgh yesterday as some of the world’s top racing drivers took to the streets.

The British Touring Car Championship is set to stage one of its biggest races at Knochhill this weekend, and a crowd of almost 20,000 gathered to watch the sports’ stars prepare.

30-year-old Shedden, from Dalgety Bay, said: “We’re here to bring touring cars to the people of Edinburgh under the shadow of the castle – it’s a real party atmosphere. 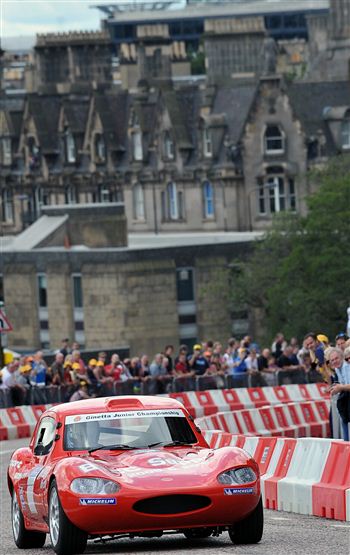 “Driving touring cars for a living is fantastic fun, it’s the pinnacle of British motoring and a door-handle to door-handle, all action sport.

“It’s what I’ve wanted to do since I was a young boy, and it feels fantastic to live the dream.”

The event, which was organised by Dunlop, saw onlookers line the race-route as the drivers showed off their skills one-by-one.

Alan Gow, series director with the BTCC, explained the massive turnout by saying that touring car had a special appeal.

Gow, 54, said: “Touring car racing is special because people can relate to the cars.

“You can come to race meetings in your Ford Focus or Vauxhall Vectra and really relate to what’s happening.

“But most of all, it’s hard, fast and exciting and you really can’t say that about any other British motor sport at the moment.”