THE WORLD famous Lady Boys of Bangkok yesterday protested against controversial plans that could force them to quit the Edinburgh Festival after 11-years of sell-out shows.

Cast members in full dress lay in wait for chiefs ahead of a meeting of the full council where plans to oust such acts from the famous Meadows area of the city.

It follows complaints from locals who claim that the acres of green space are being ruined by travelling acts like the Lady Boys, and who are demanding a dramatic cut in use.

But that would mean the Lady Boys – and others – would be left with no-where suitable to stage their acts and be forced to quit.

The headliners have performed at the same spot on the city’s Meadows for the past 11 years. 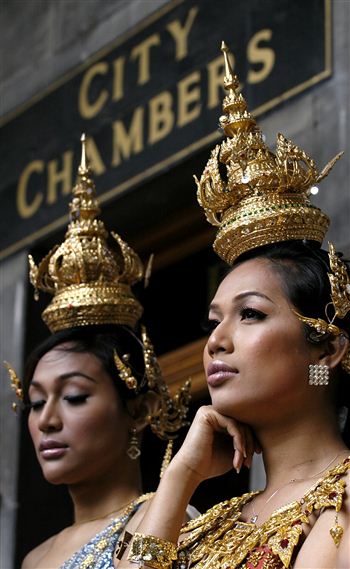 But the City Council has been put under pressure by Friends of the Meadows and Bruntsfield Links who want to see an end to festivals that they claim leave the parkland areas muddy and littered.

Yesterday the council debated the future of the site to determine whether or not to cut the usage down to two weeks – barring most shows from appearing.

The Lady Boys – in full costume and make-up – protested against the move on the Royal Mile, before sitting in on the debate in the main chamber, saying this could even be their last appearance at the Festival – despite selling out every year.

Philip Gandey – Managing Director of the Lady Boys – appealed to the council to leave the current restrictions in place.

He said: “When we first came to the Meadows I believe there was a local funfair – and I personally lost £50,000 in our first week.

“However we have invested in the Meadows and over the years have made it one of the main venues for the Festival.

“We also work closely with the council and distribute 1000 tickets to single parent families through the council.

“We believe that to restrict the biggest selling show for the last four years to just a seven day run would be a mistake.

“It takes us five days to set up and two days to de-rig – leaving us just seven days for the show – this is not viable.

“We welcome the recent changes and have found they have benefitted the quality of the ground when we arrive in August.

“We have moved further north on the Meadows to allow the land to recover and believe that this is a good measure to take every year.

“The recent restrictions have already greatly increased our costs greatly and I can tell you that we spent £50,000 a year to protect the Meadows.

“We’ve also cut down the number of caravans, and we’re not allowed to drive any large vehicles over the grass – just two minivans and a Land Cruiser. 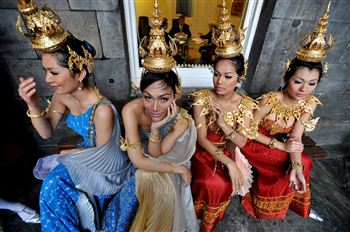 “I feel privileged to be part of the festival and looked forward to continuing our work with Edinburgh Council and the Fringe.”

The Lady Boys show – which has been the top selling Festival show for the last four years – also brings the international circus with them each year.

This year the Moscow state circus has wowed crowds with spectacular displays and high octane stunts.

Friends of the Meadows have pushed for stricter regulations, which have already been introduced this year.

The group complained that the shows at the site had “certainly not kept to their sanitary conditions” and demanded compliance in the future.

They have argued for a two week Meadows festival to limit the damage to the site.

The council may now wait until the end of the Festival to report on the condition of the Meadows.

The Labour group has pushed for a maximum stay of 17 days to be implemented – including set up and packing away.

The Green Party have supported Friends of the Meadows and asked for two weeks for the whole stay.

But Liberal Democrats members described the Lady Boys show as a “stalwart of the Festival” and have pushed for four weeks – the time period supported by the show’s management.

UPDATE: Yesterday afternoon the council decided to vote on the row with 40 Lib Dem and SNP councillors voting to defeat the move banning large sized events from the Meadows which was supported by just 15 Labour and three Green members.

A spokesman for The Lady Boys, who are now free to return next year, said; “We’re delighted.”