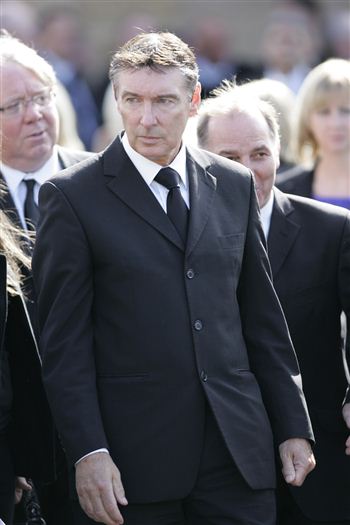 CELTIC legend Brian McLaughlin was laid to rest yesterday almost two weeks after his body was discovered after a tragic accident at the Union Canal in Falkirk.

More than 400 mourners packed into the Sacred Heart Church in Grangemouth to pay tribute to the player who was once described by Jock Stein as “better than Kenny Dalglish“.

So many people wanted to pay their respects that dozens had to listen to the service from outside the packed church as Father Leo Glancy paid tribute to the popular family man.

Former Celtic team-mate and his manager at Motherwell, David Hay, was among the pall bearers who carried his coffin.

His funeral was a traditional Catholic service, with those attending singing Morning Has Broken and The Lord Is My Shepherd among other hymns.

Father Glancy told how Brian had enjoyed a distinguished career at the very top of Scottish football, playing for Celtic between 1970 and 1976, and was one of the most widely respected Scottish footballers of his time.

Later he played for Adelaide in Australia, before returning to Scotland as a coach, doting on his family.

His friend and fellow Celtic player John Sludden paid tribute to him.

He said: “Brian was a great footballer and a great friend, I got to know him well when he returned from Adelaide.

“He was always a great joker.

“My lasting memory of him will be when he told me how he met his wife Moira.

“They first met at a bus stop in the rain and he offered her a lift home – she refused but some time later they had a chance meeting.

“Brian said that it was just as well she hadn’t said yes – because he couldn’t drive.

“We all have our own special memories of him.”

Moira was comforted by friends and relatives all devastated by the loss of the friend, father, brother and grandfather.

In a message read out on her behalf, wife Moira said: “I shall miss him so much – he was looking forward to seeing our granddaughter going to school for the first time on Wednesday.

She added: “I know he will be with her.”

One mourner – a childhood friend of Brian – said: “He was a great football player – the whole family are great players, all of his brothers – but he was the best.”

After the service mourners headed to Grandsable Cemetery in nearby Polmont for a tear filled burial.

Brian made his debut for Celtic aged just 16 but suffered a career-threatening injury two years later.

He left in 1977 for Ayr United, before signing for Motherwell, helping them to the First Division title in 1981-82.

He also played for Hamilton and Falkirk and had a spell in Australia in the 1980s.

His death on August 13 was described as a tragic accident.