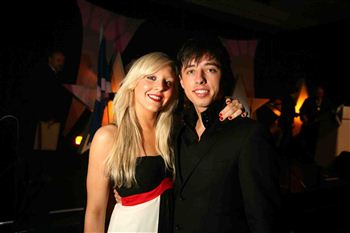 SCOTTISH reality TV star Keith Jack is teaming up with his dancer girlfriend to open their very own dance school.

The Any Dream Will Do singing sensation hopes to help out fellow youngsters following in his footsteps by launching a stage school.

The 21 year-old, and his girlfriend Alana Macfarlane, are organising the classes for kids and teenagers at the Morningside Dance Academy, in Edinburgh.

And as well as coaching dance moves Keith will also be offering inside advice on breaking into the industry.

Keith is also about to launch his second album along with getting ready for a UK-wide tour while juggling his duties at the dance school.

Pretty girlfriend Alana, 21, studied dance at an Edinburgh college and already gives dance lessons to youngsters in the capital.

The pair have been together for just over a year after falling for each other during Keith’s last tour when Alana was one of the Dalkeith-born star’s dancers.

Keith said: “After everything I’ve done, I thought it would be nice to give something back and help young people learn more about the industry.

“Obviously, it’s about coming along and learning. I thought I could also help by talking about what my life’s been like and teaching them how to deal with an audition.

“There’s nothing worse than being able to song and dance, then turning up to an audition and having no idea what to do.”

And the fleet-footed pair are hoping to entice a few famous faces to join their classes including vocal coach Chris Judge, who has worked with S Club 7 and Blue songwriter John McLaughlin.

Keith added: “I was lucky to get some good advice when I was starting out. I found auditioning really hard at first, but you’ve got to be confident in your ability and know it back-to-front.”

Places at the stage school are filling up fast with everyone from the ages of eight to 18 welcome to join regardless of their experience.

Ms Macfarlane said the duo were keen to increase opportunities for young performers in Scotland and are considering taking their stage school around the country.

She said: “It’s really exciting to be able to give something back to kids. I know when I was growing up there was not a lot of opportunities or advice going about.

“Hopefully the kids will have lots of fun and learn something new.”