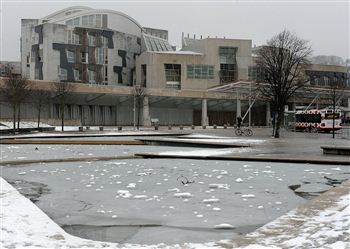 THE SCOTTISH Parliament building has come under fire after workmen were again called in to repair leaking windows.

Five of the Holyrood building’s “think pod” windows are thought to be the culprit – just 18 months after similar work was carried out.

The much-criticised building’s windows, which were famously designed by architect Enric Miralles to allow MSP’s time to sit and contemplate, cost around £17,000 each.

But the problem windows have been leaking almost since the parliament opened its doors in 2004.

The lengthy spell of repairs has led to some MSP’s being forced to keep a bucket nearby just in case of heavy rain.

Margo McDonald, an Independent MSP, claims she knew the building had problems as soon as she moved into her office.

She said: “It’s our very own Forth Bridge – as soon as they finish, they have to start again.

“When we saw the original construction and all the joints in them, we knew the rain would find its way in. But we can’t do anything about it now, other than patch them up as necessary.

Workmen using a cherry-picker crane were seen last week carrying out the essential repairs and were due back over the weekend to complete the job.

A Scottish parliament spokeswoman said the leaks were found in five different think pod areas – one on the first floor, one on the second and three on the third.

The spokeswoman said: “We are repairing five minor leaks in the MSP pod area, the cost of which is expected to be less than £2,000 – which will come from our existing maintenance budget.

“The leaks, which have not caused any damage to the areas they have been found in, were investigated the same time the oak poles were removed for re-varnishing work is now under way to seal the areas.

“This is a recurring problem in three of the pods and as part of the current repair work we are investigating the source of the leaks in these areas.”