The Aussie hunk – riding high in the top five of the album charts with his new record Revelation – was in Edinburgh visiting the Asda store at The Jewel as part of a whirlwind promo tour following his split from former model Katie Price.

Ironically it was Asda that has just revealed they have dumped Price – formerly known as Jordan – as one of the faces of its Tickled Pink breast cancer campaign over comments she made on TV show What Katie Did Next about her cosmetic surgery scars.

But last night Andre was the only centre of attention as hundreds of girls and women turned out for a glimpse of the star and the hope of being one of the lucky few to grab an autograph.

Security was tight as the Mysterious Girl singer surrounded by a dozen body guards reduced some girls to tears when they got to meet their hero who arrived for the 5pm session in a tight fitting grey shirt. 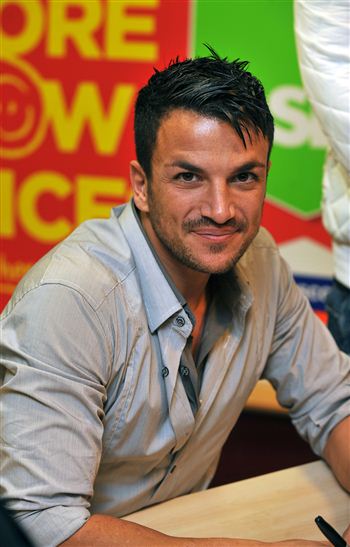 “At least half of Britain is Team Andre. He’s come out the split much better that Katie – definitely. Everyone loves Peter – he’s so nice.”

Michelle Hastie, 20, a hairdresser from Loanhead, Midlothian, was one of those waiting for hours for the chance to get up close and personal with the pop prince.

She said: “I’ve been waiting here all day. He’s so sexy – I’m going to ask him for a kiss. His new album is brilliant, I’m going to get it signed.

One woman brought her child to meet her hero.

Emily Graham, 25, from Wallyford, an admin assistant at the Scottish Government, said: “I’ve brought my baby girl Shye – she loves Peter too. 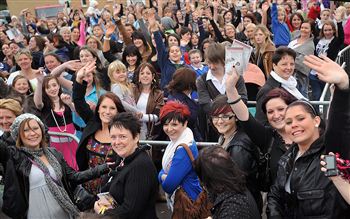 “He’s stunning, he was always too good for Jordan.

“I didn’t think there would so many people here, but it’s worth it.

“I want his phone number.”

Andre is scheduled to make another appearance at Asda in Hamilton, Lanarkshire at 1pm today.