A PARAMEDIC who was among the first to treat tragic Motherwell FC legend Phil O’Donnell on the day he collapsed and died has avoided being struck-off despite refusing to respond to emergency calls. 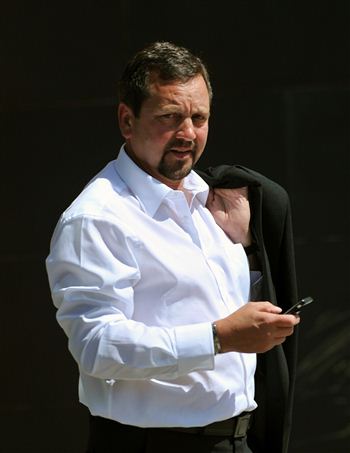 William Munro faced being banned from work after he refused to respond to separate mercy pleas from two OAPs in April 2006.

He said that he was suffering from post traumatic stress disorder after twice being confronted by blade wielding patients who he was trying to help – including one with a Samurai – and was “anxious” at responding to calls while on a single-man shift.

Following the refusal Munro was suspended by the Scottish Ambulance Service before he joined a private paramedic firm that attends sporting events – including the tragic match which saw the former Celtic idol pass-away.

A letter from Motherwell FC produced on his behalf described Munro, from Glasgow, as “an excellent paramedic” who excelled in his duty.

He escaped a tribunal of the Health Professions Council with a two-year caution despite being found guilty of misconduct after considerable deliberation by the panel.

Although the council’s competence committee said that Munro’s “reckless” behaviour “fell well below what is expected of a paramedic” they found that he was fit to continue in his job.

The result comes following two days of evidence at a hearing in Edinburgh.

Panel Chair Raymond Pattison said: “Having considered the report it is accepted that Munro was displaying PTSD at the time of the incident.

“Munro displayed reckless behaviour and fell well below what is expected of a registered paramedic.

“The allegation is well founded and Munro is impaired in his practice, however this was an isolated incident in an otherwise unblemished career.

“Munro has shown great insight into his condition and has sought medical advice. The panel has concluded that there is very low risk and has cautioned him for two years.”

Representing Munro Alex McLuckie said: “I’m pleased that the committee has accepted that Munro was suffering from PTSD and we are also pleased that there are no questions over his competence at work.

“The incident was restricted to one shift on one day in a seven-year career as a paramedic.

“I think in terms of a result we are pleased the committee recognised that Munro was suffering from a stress related illness after two violent incidents at work.

“These are the kinds of incidents that brave ambulance personnel can come across in the course of carrying out their duties and we are pleased that the panel has allowed Munro to continue in his work as a professional paramedic.”

Munro had refused to attend two calls involving elderly patients while on duty on April 24, 2006.

The first involved an 82-year-old woman who was experiencing breathing difficulties while the other plea for help was from a 70-year-old man with chest pains.

In both cases, Munro’s refusal cost the patients valuable minutes before emergency operators were able to find replacement medics.

Munro said that being twice confronted by blade wielding thugs while on jobs had left him with post-traumatic stress disorder.

On that day his crew partner had called in sick, leaving him to operate the ambulance on his own.

Unaware of his situation the emergency dispatch operators tried to get his vehicle to attend to the two calls.

Paramedics are required to respond single manned to an emergency call if there is no indication of violence or alcohol. The hearing was told both incidences met those criteria.

But Munro claims he refused the calls because he was “anxious” about attending them on his own after being confronted by a mental health patient brandishing a knife, a hammer and a Samurai sword in October 2005.

And, he said, six months later he and his partner were challenged by another man carrying a knife.

Both paramedics at the time were forced to seek shelter in their ambulance and call police for assistance.

Phil O’Donnell was just 35-years-old when he fell to the ground towards the end of his side’s match against Dundee Utd in December 2007.

With the Lanarkshire side leading the game 5-3, he was about to be substituted for team mate Marc Fitzpatrick when he collapsed on the Fir Park pitch.

Paramedics and club doctors worked on him for at least five minutes on the field before carrying him on a stretcher to a waiting ambulance.

But O’Donnell, who earned one cap for Scotland, died on his way to Wishaw General Hospital despite attempts to resuscitate him.

A post mortem later revealed he had suffered a left ventricular failure of the heart.