Council pays £1.11 per letter to shift post down corridor 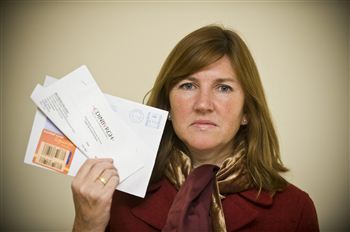 A COUNCILLOR has lashed out at the “absurd” culture of waste at one of Scotland’s biggest local authorities after she discovered that recorded delivery letters were being sent between offices in the same corridor.

Alison Johnstone was bewildered after she discovered that the legal services department at City of Edinburgh Council, which is “along the corridor” from her office, had been paying £1.11 per letter to post them several yards.

The Green councillor has said that the council was lacking “common sense” and has to be taken to task over inefficiency.

She also highlighted that the council uses eight miles of paper per year, despite having to make savings of £90million over the next three years.

Councillor Johnstone said: “For some reason I was sent a response by recorded delivery from someone along the corridor.“I know they might have wanted to be sure that I received the response but we have to use common sense.

“That is just complete thoughtlessness which should not be allowed.

“If mail can be delivered internally, it absolutely must be.

“If they are determined that a signature is needed, they can ask a member of staff to sign for it.

“We can’t have taxpayers paying or recorded delivery letters which just travel along the corridor – it’s absurd.

“I’m absolutely convinced that we could be more efficient than we are.”

Johnstone raised the matter at a public meeting with parents on the future of education in the city.

She questioned the plans to close four city primary schools, saying that cuts could be made elsewhere.

She added: “I started by looking at the simple cuts we can make in terms of efficiency.

“You can walk into any office and see the amount of paper floating around.

“A paperless office is never going to be possible, but do we need all the paper that we have, or all the stationary?

“It’s something the audit committee needs to look at very carefully.”

Councillor Phil Wheeler, the council’s finance leader, said: “A small amount of mail had to be sent recorded delivery for legal reasons.

“Finding smarter ways of working is a top priority for this council, as we are facing extremely difficult financial times.

“Earlier this year over 5,000 staff switched to paperless payslips and a programme to cut down on wasted paper is on schedule to deliver significant savings.