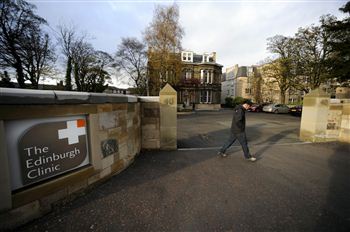 A CUTTING-edge private healthcare clinic worth more than £8 million is being sued for failing to pay its builders.

The Edinburgh Clinic has found itself at the centre of a £500,000 legal wrangle with around a dozen subcontractors and suppliers claiming not to have been paid.

The centre, which is based the upmarket Colinton area of the city, is touted as Scotland’s first “five-star” private healthcare clinic, boasting cutting edge medical technology and some of the top surgeons and consultants in the country.

But Midlothian-based Arthurseat Ltd, the centre’s main contractor, launched legal action after work on the complex was finished in February.

The construction firm claim that they are owed “in excess” of £500,000, and they in turn owe subcontractors, some of which have been forced to lay off staff because of their shortfalls.

Ruari Stephen, a director at Arthurseat, said that his firm were seeking “in excess” of £500,000.

He said: “Basically, the Edinburgh Clinic have not paid us for construction work – I’m extremely disappointed.

“We are a young company and we built them a fantastic facility.

“This is also having an impact on our subcontractors, many of whom are local businesses.”

Scotfloor UK Ltd’s have also been caught up in the dispute, with boss Ian Greenhalgh claiming he is owed £13,000 by Arthurseat.

Dr Ray Stanbridge of the Edinburgh Clinic confirmed that there was currently legal action ongoing.

He said: “I can confirm that there’s a dispute with the builder. The building is up and running.

“Clearly, it would be inappropriate to make a comment which would prejudice the case for either side.”

A preliminary hearing at the Court of Session is due to go ahead on 17 December.

The Edinburgh Clinic, which deals with up to 50 patients per day, has five consulting rooms, three physiotherapy suites, an operating theatre and a room for minor surgery.

It is also equipped with an MRI scanner, a CT scanner and the only non-invasive cardio screening technology in Scotland.