Child knocked off school waiting list due to house location 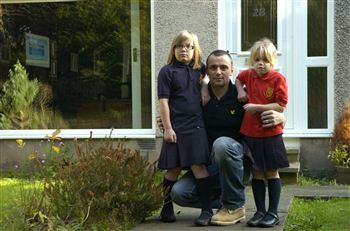 A FIVE-YEAR-OLD girl has been bumped from an Edinburgh primary waiting list after a new family with a P1 pupil moved into a house – just 90 metres closer to the school.

Logan Finlayson had been second in line for a place at James Gillespie’s Primary but now will have to remain at her catchment school.

The new family – who live only seven doors away from the Finlaysons on Relugas Place – has a child of starting-school age who will take Logan’s spot.

Logan’s dad Craig, 35, has now blasted Edinburgh City Council for their handling of the situation.

He said: “The council are saying that their house is closest, but given that we live on the same street I don’t think it makes that much difference.

“It’s a ridiculous policy and I think the council should be reviewing it.

“I’ve heard that there are two people leaving at Christmas, so if she was still second on the list, she would get in.

“But now that she’s third, she won’t.

“I’m not blaming the other family, it’s not their fault at all.

“They moved in last week and my wife spoke to them and they even apologized for going ahead on the waiting list.

“This basically means that anyone else can move into the street and get on the list before us.”

Logan had been on the waiting list for a year and her older sister, Taylor, already attends Gillespie’s.

Craig, who works as a scaffolder off-shore, added: “Logan went to nursery at St Gillespie’s and we’ve had her registered for the school since then.

“It’s hard for my wife having to take them both to different schools, especially when I’m off shore.”

A City of Edinburgh Council spokesperson said: “We must manage school waiting lists in a way that is fair to everyone and, to ensure they are fair, all parents are made aware of how we prioritise applications.”

The family of the other child were not available for comment.