A FOOTBALL steward has been banned from every ground in Britain for a year after throwing a flare onto a pitch. 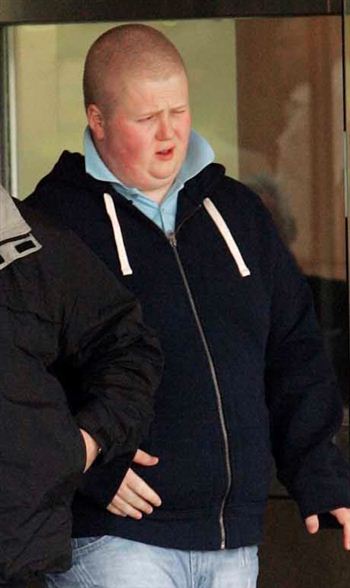 The court order means Michael Smith, 21, will lose his pitch-side security job with SPL side Falkirk.

He was arrested at a high-tempered derby match between rivals Linlithgow Rose and Bo’ness United when cops spotted the smoke bomb being hurled onto the pitch.

It wasn’t hard for officers to trace the arc smoke back to Smith, who was fined £1,000 and branded “mindless” by a Sheriff today (Thurs).

A Falkirk insider said last night: “This is exactly the kind of thing we employ stewards to stop other people doing, never mind doing it themselves.

“It’s completely stupid, but stewards are never the brightest anyway.

“We’ll be speaking to police, but it will be an instant dismissal.”

Smith’s antics forced last month’s game at Prestonfield Park to be delayed while police cleared the 15-inch long flare from the field.

Fiscal Depute Alastair Learmonth told Livingston Sheriff Court that Smith had been seen in the ground’s away end among the Bo’ness supporters.

He said: “The ground was mainly made up of adults with young children.

“The flair appeared to come from over a wall and landed on the pitch.

“The game was delayed while a police officer went on to the pitch to retrieve the flare.

“Mr Smith was traced and made a full admission to throwing the flare.”

Smith, of Stewart Avenue in Bo’ness, Falkirk, pled guilty to culpable and reckless conduct and breach of the peace by throwing a flare into Prestonfield Park on October 10 in court yesterday.

He got the flare from a paintball centre, according to defence agent Darryl Lovie.

Mr Lovie said: “If anyone should know better, it is Mr Smith as he is, somewhat ironically, employed at Falkirk football stadium on Saturdays as a steward.

“Whether or not this conviction will affect his ability to do so remains to be seen.

“As I understand it, this device can only give off a plume of smoke; there was no fire, and if this item were to strike someone, it wouldn’t cause injury.

“It is normally used for paintballing, and while paintballing is a controlled environment, this is not a dangerous device or explosive.

“That’s not to take away from the fact that clearly this occurred in a largely populated football match.”

He also said Smith had just left a full-time job with Scottish Widows, with the aim of going to college to become an engineer.

Now jobless, Smith claims he wants to start a racing car business when he finishes studying.

Sheriff Douglas Kinloch told him: “What you did was reckless and caused disruption.

“This is the kind of mindless behaviour that spoils the enjoyment of people who like to spend an afternoon being entertained at the football.

“It is very sad that this was carried out by someone who works as a football steward and should therefore have known better.

“There will be a substantial fine, but I also consider it an appropriate and just punishment to impose a football banning order.

“You will be banned from attending any football matches for one year.”

A Falkirk FC spokesman said: “I can confirm that Mr Smith is employed by the club as a security guard.

“Once we get confirmation from the police, we will be dealing with this internally.”