THE FIRST ever replica of a 1000-year-old Pictish throne has been unveiled at the National Museum of Scotland after months of painstaking research and craftsmanship. 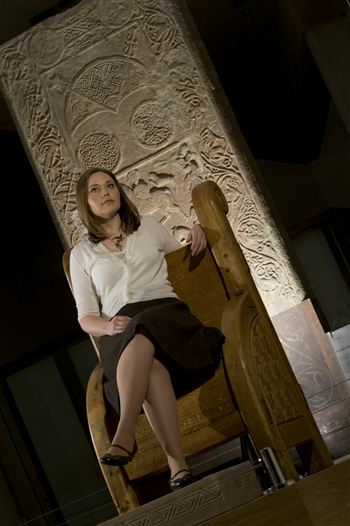 The original throne – thought to be the seat of a bloodthirsty warrior king – no longer exists, but the replica is intended to give visitors a glimpse of Scotland’s brutal tribal past.

Today (Thursday) the National Museum of Scotland unveiled the throne, which was commissioned in partnership with Glenmorangie Single Malt and is set to move around Scotland first going on display at the Edinburgh Festival Theatre from 1 December.

David Clark at National Museums of Scotland said: “Thrones were symbols of authority and power and as such would have been a very important part of Early Historic Scottish society that has hitherto been rather overlooked.

“There are no surviving examples of thrones from Early Historic Scotland and during the process of recreating this piece we’ve learnt so much about the design, manufacture and use of these thrones.

“It’s very exciting to see this type of throne brought to life for the first time in over a thousand years.”

The throne – into which clan symbols have been etched – will then move on to the Glenmorangie Distillery in Ross-shire in 2010, and from there will be on display at various locations around Scotland.

It was created by craftsman Adrian McCurdy in a bid to spark interest in Scotland’s past and show how sophisticated early Scottish society was.

Paul Neep, chief executive at Glenmorangie, said: “We are delighted to be able to work with National Museums Scotland to enable them to make exciting revelations about this period.

“At the Glenmorangie Company we are proud of our Scottish roots, particularly the ancient art and culture of the Picts which surrounds our Distillery in Ross-shire.”