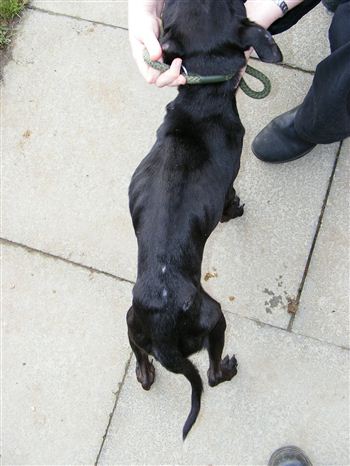 A NEW mum has been banned and fined after animal welfare officers seized three starving dogs from her home – some just days from death.

Scottish SPCA officers raided the home of Marie Ramsay, 21, after they were tipped them off about the painfully thin pets.

The Staffordshire Bull Terriers were immediately taken into care and nurtured back to health.

And yesterday at Livingston Sheriff Court yesterday (Tuesday) she was banned from ever owning the pups again.

The eldest dog, nine-year-old Dino, was described as “near emaciation” with no body fat and clear muscle mass loss when rescued by the Scottish SPCA inspector.

Ms McCloy said: “He weighed 9.7kg and should have weighed 15kg or over for his size and breed.

“He had some skins sores with scabbing over bones due to a lack of muscle and fat.

“The vet indicated that suffering would have occurred over a few weeks and it would have caused unnecessary suffering.

“It was noted that Dino could have survived no more than a few days as it would have led to starvation and death.”

She said that the other dogs, one-year-old Star and two-year-old Coda, were nearly 10kg underweight combined.

Both were described as very thin with visible bone structures and an “hour glass” figured waist.

The court heard that the Scottish SPCA received a complaint on February 22 regarding the dogs within Ramsay’s home in Burnside Drive, Whitburn.

Ramsay met the inspector and told him there was “nothing wrong” with the dogs – she later claimed that she thought there was something medically wrong with her pets.

The inspector noted the dogs were “extremely thin” and when Ramsay was asked if they had attended the vet she said no.

Ramsay, a single-mother-of-one, admitted causing three Staffordshire Bull Terriers unnecessary suffering by failing to give them vet attention resulting in their emancipation.

Laura Russell, Ramsay’s solicitor, said her client was desperate to have the dogs back.

She said: “It’s been Miss Ramsay’s position that she was feeding the dogs a considerable amount.

“She thought that it was something medical, perhaps worms, and before the Scottish SPCA became involved she was concerned about the condition of the dogs.

“She bought worming tablets for all three dogs and wormed them and following that she monitored the dogs to see if their condition was improved.

“She also upped their food – these three dogs were eating three tins of food every day.

“She accepts that when the dogs were not improving following the worming that she should have gone to the vet – this case has caused her some distress.

“The dogs meant the world to her and she is so sort that the dogs were suffering unnecessarily.

“She accepts that she has not done enough – at the time of the offence she was in and out of hospital – she had difficulties following the birth of her daughter.

“In the middle of these difficulties she didn’t give the dogs the attention they deserved.

“She was doing everything she thought she could do for the dogs – she’s very, very sorry about this and she would very much love to have the dogs returned to her.”

Sheriff Alan Miller said to Ramsay that despite her difficulties the dogs were left in an “extremely poor” state.

He said: “I have heard a very detailed account of the circumstances here – the care of an animal is a very serious responsibility.

“I accept at the time you had other difficulties and other matters on your mind with the birth of your daughter but the fact is that all three dogs as I have been told were in an extremely poor condition.

“I have been told that all were underweight and one was in days of starvation.”

Sheriff Miller fined Ramsay £270 and made a depravation order which banned her from ownership and possession of the dogs.