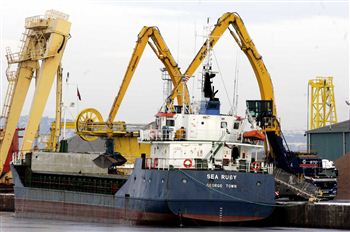 SNOWED under councils will have to hold out until the weekend for more grit to arrive by sea as conditions worsen on Scotland’s roads.

Routes in the Borders are so treacherous that Scotland has become completely reliant on the lifeline of huge transport ships bringing salt and grit into the east coast ports of Leith, Rosyth, Dundee and Aberdeen.

This comes as the head of the AA for the UK has said that the supply chain is “creaking at the seams” despite government assurances that there is no issue with stocks.

A spokesman for Cory Brothers Shipping Agency said that their vessels had been working flat out to handle the demand from local authorities.

He said: “There is another delivery due, which will hopefully come in over the weekend.“The order is in – the ship’s not been allocated yet, but it will be carrying around 3400 tonnes.

“This is the only way that the grit can get up here really.

“Otherwise you’d have to have 40 or 50 trucks on the road and in these conditions, they wouldn’t get through anyway.”

With ice and slush covering many of the roads in Scotland, the grit is now critical to keeping Scotland’s roads open, as fears of a food supply crisis are looming.

Edmund King, president of the AA, said that the supply chain of salt and grit is “creaking at the seams”, as imports from Egypt had to be brought into the UK yesterday.

He said: “We have to keep the main transport routes across the country in operation.

“Even if the temperatures are making it less effective, it is still absolutely worthwhile the councils carrying on.

“And I think there are certainly issues with the supplies.

“There are only two salt mines in England; one in Cheshire and one in the north east.

“The Cheshire salt mine can supply 30,000 tonnes per week, which is 50 per cent of stocks for the UK.

“The Tees mine may be 25 per cent, and there’s another in Northern Ireland.

“The source is not endless, but you’ve also got logistical problems like having to ship it around the UK.

“For example a 44 tonne truck can only take 30 tonnes of salt.

“And as we saw today supplies have been coming in from Egypt, so there’s no doubt the supply chain is creaking at the seams.”