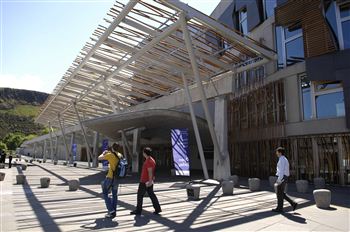 BOSSES at the Scottish Parliament have been forced to apologise after a “very vulnerable young” transsexual visitor was searched by a male security guard.

Staff at Holyrood launched an investigation after the woman – who was previously a man – was refused the right to be searched by a woman security officer.

The visitor – who is only described as 18-25 – was attending an event at the parliament organised by LGBT Youth Scotland, a gay, lesbian, bisexual, and transgender rights group, when the incident occurred.

She was passing through the airport-style scanners at the parliament’s entrance, where visitors are physically searched if the detector goes off.

The group made a formal complaint with Holyrood after the woman became upset following the search.Mhairi Logan, head of policy for LGBT Youth Scotland, said: “The person involved is a very vulnerable young person.

“We did make a formal complaint and the parliament are taking it very seriously.

“We’ve worked very closely with the Scottish government and members of the Scottish Parliament in the past, and we’re working with the parliament at the moment on this issue.

“We have received an initial letter of apology and we expect the issue to be resolved soon.

“There is a lot of ignorance about transgender people, not necessarily through badness, but just lack of knowledge.

“A lot of organisations don’t have any guidelines in place, but things are changing.”

The incident appears to have been caused by confusion on the part of the security guards and occurred during a visit to the Scottish Parliament by members of the National Youth Council of LGBT Scotland on 26 November.

A spokesman for the Scottish Parliament said: “While we cannot comment upon or confirm individual cases, we take issues of equality extremely seriously.

“If we do get a complaint and it turns out that we got it wrong, we would acknowledge that and apologise to the person concerned and seek to ensure that all of our visitors are treated with the respect and dignity they would expect from their parliament.”