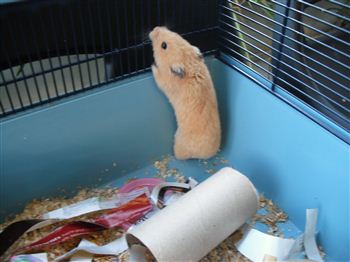 A HAMSTER found dumped outside a block of flats without any feet may have chewed all four of them off.

Vets were shocked to discover the tiny rodent acting strangely and had its leg bones exposed.

But they couldn’t come up with an explanation for the pet’s severed state.

And now the Scottish SPCA is on the hunt for the owner of the deserted animal.

Scottish SPCA ambulance driver Jennifer Hamilton said: “It’s very sad when animals are abandoned, but this was particularly shocking when we discovered that she did not have any feet.

“The vet who examined her said that she may have chewed them off herself, but we don’t know what would have driven her to do this.

“Whatever has happened, she must have been in a great deal of pain and her owner should have taken her for vet treatment.

“The injuries appeared quite old, but we can’t say how long ago this happened.”

The female hamster was found alive and well in a wire cage by a member of the public in Grangemouth’s Central Avenue.

Children’s cartoon character stickers were stuck to the side of the cage’s blue base tray.

The Scottish SPCA collected the furry creature and after a check-over by the vet, she was humanely put to sleep.

Ms Hamilton added: “The bone was exposed on some of the legs and she was unable to display normal hamster behaviour such as cleaning herself or climbing the bars of her cage.

“Although she was able to move around the cage and eat her food, her quality of life was severely limited and it would have been very cruel to allow her to continue struggling in this way.”

The charity is warning Scots that abandoning an animal is a criminal offence that carries stiff penalties up to a maximum of six months in prison, a £5,000 fine or both.

Anyone found guilty can expect to be banned from keeping animals for a fixed period or life.

Anyone with information relating to the hamster is asked contact the Scottish SPCA Animal Helpline on 03000 999 999.