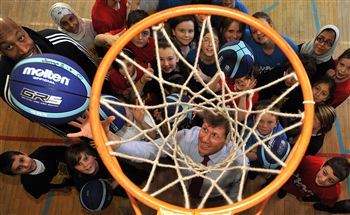 Pupils at Gracemount Primary School in Edinburgh were kitted out with outfits, hoops and brand new balls courtesy of cons banged up in the slammer.

The event was part of CashBack for Communities, which will see the proceeds of millions of pounds of criminal assets invested in programmes across Scotland.

And the government minister even said he hoped the criminals would see the benefit of the sale of their ill-gotten gains.

Justice Secretary MacAskill said: “We’re taking money from those who have been selling drugs and perpetrating crime in our communities and putting it back in, so our kids can be all they can be.

“Scotland is football obsessed but it is important that we have other sports, and I’m delighted to see kids have the chance to meet professional basketball players, to get coaching in the game.

“The money that we spend on CashBack for Communities whether it’s basketball, football, arts or drama, comes from money we take from those who deal drugs, who perpetrate crime in our communities, and damage communities like this.

“We take money from those who are living lavish lifestyles, who have been peddling drugs and perpetrating misery.

“We take their assets, we sell them and confiscate them weather its houses cars or Rolex watches – every penny we get, we spend.

“I hope they’ll see that there’s some benefit come from it.

The basketball focus is part of Jump2It, a tour of 150 schools, with players from the Rocks, Scotland’s only basketball team.

The players, including 6ft4 Texan captain Sterling Davis, paced the courts with the kids, tearing them away from the football pitch to learn how to shoot some hoops.

Sterling Davis, the team’s head coach, said: “A lot of the kids haven’t played basketball but we’re going to expose them toy it.

“I think it’s a great idea to take cash from criminals in a deprived area and pump it back in, in a positive way.

“I saw the justice secretary shooting, he does have the height of a basketball player and his skills looked ok.

“I expected him to be a little bit worse but he made a couple of baskets.

“We have some really up and coming basketball players here and they’re good role models for kids here.”