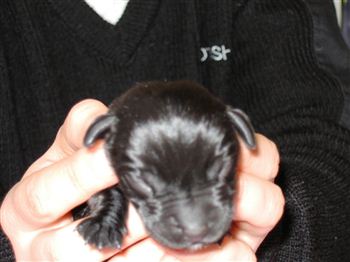 A NEWBORN puppy has been saved from death after it was found abandoned in the street.

The hours-old black female was discovered by a passer-by who alerted animal welfare officers to the freezing pup.

And now the tiny dog – who was still in her birth sack when rescued – is fighting for her life whilst in the care of the Scottish SPCA in Edinburgh.

Tilly was found in The Orchard area of Tullibody, near Alloa, on Wednesday night when temperatures plunged below freezing.

The Scottish SPCA thinks the poor puppy may have been born outdoors and abandoned by her mother.

Scottish SPCA Inspector Leanne McPake took Tilly to the Edinburgh and Lothians Animal Rescue and Rehoming Centre at Balerno, where she is now being hand-reared.

She said: “It was very lucky that the passer by discovered her when he did as she would not have survived out in the cold for much more than a few hours.

“We don’t think it’s likely the pup had been dumped by someone as she was still in her birth sack, which is extremely flimsy and would break very easily with minimal movement.

“It may be that her mother gave birth outside and was moving her when she dropped her, or it could be that someone was out walking her mother and did not realise that she had given birth.

“We would have concerns for any other pups she may have had outside as the weather continues to be extremely cold.

“Whatever has happened, we are keen to trace the owner of the mother and her puppy.

“Hand-rearing puppies from birth is very difficult and success rates vary but we are keeping our fingers crossed that Tilly will pull through.”