Tributes paid to lifelong fan and ‘grandmother of Hibs’ 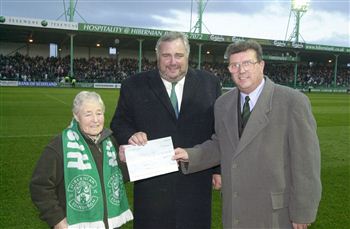 SHE followed her beloved team as a tot, girl, teenager, bride, mum, and ‘grandmother’ to the side.

And now Hibs’ greatest fan has been honoured by supporters, players and the club’s owner after loyally following the team for decades.

Maude MacFarlane died on Monday at the age of 93 after becoming a staple of the Edinburgh side’s support.

Tributes have poured out to the charismatic pensioner described as the “grandmother of Hibs”, who even followed the club as far as Trinidad and Tobago and Greece to cheer them on.

Maude, from Corstorphine, was widely loved by fans, and known for running the Hawkhill supporters’ away bus, known as ‘Maude’s bus’.

Willie McEwan, treasurer of the Hibs Former Players Association, used to sit with Maude at the stadium’s Edinburgh Suite, as well as taking her to the side’s away games in her later years.

He said: “So many people remember her from running that bus – for many it was their first experience of away games.

“She would get a real thrill when people came up to her and recalled memories of that bus.

“She knew everyone and was undoubtedly one of Hibs’ most famous fans.

“She travelled all over the world to see them. I’ll never forget all the police in Athens when Hibs played there, with their riot gears and shields, and she just hobbled right through them with her stick and scarf.

“They were stunned – the Greeks had never seen anything like it.”

When Maude wasn’t at Easter Road or away games she spent much of her time collecting for St Columba’s Hospice, where her husband died 17 years ago.

She later became an Edinburgh Citizen of the Year to her work.

Willie added: “She also had to bury her own daughter, which she never recovered from.

“She never had any grandchildren of her own, but she was grandmother to Hibs.”

Maude had struggled to recover after she was hit by a drunk driver in 2000, which nearly caused her to lose her leg, and her mobility reduced since the incident.

Since she passed away peacefully at the Western General earlier this week the Hibs.net website has been bombarded with tributes to the lifelong fan.

Hibs owner Sir Tom Farmer said: “She was a true lady and supported the team through the thick and thin.

“If the team was on a bad run, it was the weather’s fault.

“There was no-one like her with that enthusiasm for football. She always referred to the players as her ‘boys’.”

Hibernian FC said that discussions are already ongoing as to how to pay tribute to Maude, but said it was too early to say how.

Scott Lindsay, chief executive of Hibs, added: “It is a sad day for everyone associated with Hibs.

“She enjoyed a unique status with the Hibs fans and will be sadly missed.

”She is someone whose courage inspired lots of people.”