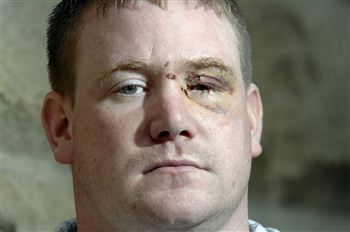 A BOUNCER who was blinded in a savage stiletto attack by a drunk clubber has spoken of the devastating effect the assault has had on his life.

Graham Roach had to have his dead eye removed and replaced with an implant in a delicate operation after drunk Sarah Marsden stamped on the young dad’s face.

The 28-year-old was working at the trendy Shanghai nightclub, attached to the boutique Le Monde Hotel in Edinburgh, when the life-changing attack took place.

Last night Graham branded the 37-year-old “despicable” and called for her to go to prison for “as long as possible”.

Marsden left Edinburgh Sheriff Court on Tuesday shouting abuse at photographers after pleading guilty to the assault, while her partner Anthony Walker, who was present when the attack took place, admitted to a breach of the peace.

The court had heard of the shocking injuries caused by Marsden’s red stiletto shoe, which had entered his eye socket and punctured his eyeball on 25 July last year.

Last night Graham said: “It was an unprovoked attack. When I was on the ground she knew what she was going.

“I don’t know if she was aiming for my eye but she was definitely going for my head.

“Since she’s pleaded guilty she’ll get a lesser sentence, but I hope she goes inside for as long as possible for what she did.

“I try not to think about her and what she did, because she’s a waste of space and not worth it.

“The impact of what happened has been really hard.

“I had to explain it to my daughter, which has been the hardest part, and it’s also affected my life and work.

“It’s changed my life but I’ve tried to stay positive with the help of family and friends.”

On Tuesday the court heard how Marsden and her 49-year-old partner had been refused entry to the nightclub because they were too drunk.

Graham, along with his colleagues, thought he had resolved the situation after Walker initially threatened them with a bottle.

However Marsden, who lives in Leith, spat in Graham’s face, and a brief scuffle ended up with the bouncer falling to the ground, where the savage attack took place.

Graham left Le Monde on Saturday and has become head bouncer at the student-favoured Three Sisters bar in the city’s Cowgate.

He added: “It will be something that I have to live with for the rest of my life. I’ll have to visit the Eye Pavilion, probably on a yearly basis, to have the eye socket cleaned.

“It has affected my balance and peripheral vision, which can cause difficulties at work, but the staff at Le Monde were so supportive during time when I had to be off for operations and things.

“The false eye has worked out better than the doctors expected.

“It’ll never look the same as before but it’s a big improvement.”

On Tuesday Sheriff Neil MacKinnon bailed Marsden and Walker and ordered them to return to court next month.