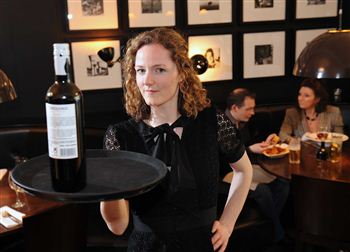 A SINGLE mum who dreamt of being an inventor as a child is set to showcase her new hospitality device at the Edinburgh International Festival.

Alison Grieve has patented and received full backing from Scottish Enterprise for her Safetray, which is expected to sell around 150,000 units in its first year.

The simple device is a rubber coated tray with a hand clip on the bottom, to help balance and prevent waiters from dropping expensive cocktails and champagne.

The mum of twins, who has no design experience, managed to juggle looking after her five-year-old boys and coming up with a design for the tray.

Now the device is to be supplied to bars and hospitality firms across central Scotland this summer.

The 32-year-old said: “I did have an events business and through that came up with the idea.

“I was managing an event last summer for an international group of lawyers and a moment before they came in one of the waitresses dropped champagne everywhere.

“It was like a eureka moment, it was nothing revolutionary but with these things the simplest are the best.

“I have no design experience and didn’t study business, I just scribbled down some ideas and sent them to Fearsomengines, the design company.

Alison, who is from Edinburgh, managed to secure the backing of Scottish Enterprise for the production of the trays, and they are now currently putting the device through trials.

Linda McPherson, director of Scottish Enterprise, said: “Safetray is a great example of innovation in the Scottish hospitality industry.

“Good ideas based on an understanding of the market and implemented well can revolutionise a business or group of businesses, increasing profitability and improving competition.”

Alison now hopes that her invention will become a regular site in the catering world.

She said: “We will have SafeTray in bars, hotels and restaurants across central Scotland by the summer and we expect to manufacture roughly 150,000 in our first year, generating around £600,000 turnover.

“The national tests of the trays will begin in April and the first 2,500 will be manufactured by the summer, which will be distributed throughout a national hospitality chain as part of the testing process.

“I’ve had to juggle a few things with the boys but it seems we’re finally getting there now.

“I didn’t imagine I’d ever come up with something like this but my parents have got a video of me saying I’d become an inventor one day from when I was six.