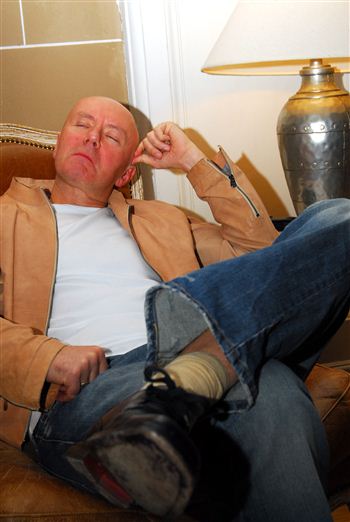 IRVINE Welsh has revealed he has turned his back on British theatre because it is dominated by “pansies and nutjobs”.

The author and playwright said he is fed up of the UK stage being dominated by “crap” and “full of tortured ponces”.

The Edinburgh-born writer, best known for his novel Trainspotting and the film version that followed, is believed to have been unhappy with criticism of his plays when he made the comments to ABC Australia.

He said: “It’s one of these horrible frustrations in life, I really love theatre, to me it’s like watching a live band playing as opposed to listening to a record.”

“The horrible thing is that in Britain theatre is just crap, it’s full of pansies and nutjobs.

“It’s full of tortured ponces that have no f****** clue about drama.

“It’s really frustrating. I would love to do a lot more stuff in theatre but I would never do it in Britain. It’s a horrible place for theatre.”

“It’s a shame because to see your words being acted back by strong performers is a very strong and powerful thing and I’d like to do more of that.

“There’s no money in it as well and that’s another thing that’s pretty frustrating.”

Welsh has had an uneasy relationship with critics since his first play, You’ll Have Had Your Hole, was savaged by reviewers when it was shown at the West Yorkshire Playhouse in Leeds 12 years ago.

The Daily Telegraph’s theatre critics Charles Spencer said it was the “most obnoxious and contemptible play I have ever sat through”, after watching scenes of male rape, torture and drug abuse.

While the Independent’s critic Robert Butler said that Welsh “goes so far out of his way to taunt us that one recoils from recoiling – he wants us to have a bad time”.

Welsh, who is now writing a prequel to his most successful novel, has also said that seeing his characters in plays like Trainspotting, which was adapted for the stage by Harry Gibson, gets in the way of his writing.

He said: “I saw Gerry Butler who is now a big star in Hollywood playing Renton on stage in Glasgow and obviously Ewan McGregor playing him in the film and you start to associate them with the character.

“The images do take over in your mind.”

Jon Morgan, director of the Federation of Scottish Theatre, hit back at the Welsh’s attacks on the industry, adding that 3m people in Scotland attended some kind of production last year.

He said: “It’s unfortunate that Irvine Welsh has not had as pleasant an experience in theatre as he would like.”

“Trainspotting became a successful film off the back of a successful stage tour so he has got a lot to thank the theatre sector for.

“The theatre sector in Scotland is really diverse, we have companies all over the country and it’s by no means an urban, middle-class thing.

“I wouldn’t describe his decision not to work in theatre any more as a loss, but I think it’s a shame because there is some amazing work being produced.”

Richard Demarco, who co-founded Edinburgh’s Traverse theatre, said: “The world’s greatest actors and theatre agents have taken the trouble to come to Britain, so Irvine should ask himself why this is.

“I have put on productions at Barlinnie prison and Polmont Young Offenders Institution, that’s not being a pansy.

“It’s sad that Irvine doesn’t want to be associated with theatre in the land of his birth.

“He has a touch of genius and should be able to keep going after getting criticism.

“Waiting for Godot got bad reviews when it was first shown.”