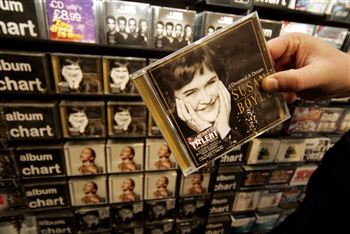 SUSAN Boyle will celebrate her 49th birthday in style this year – by becoming a multi-millionaire.

The Scots singing sensation will receive £4 million pounds on April 1st thanks in part to the overwhelming success of her debut album.

And it’s only been just under a year since the Blackburn-born star impressed judges on Britain’s Got Talent and became an overnight global sensation.

But a close friend of Susan said she will not be affected by the massive cash payout.

She said: “People have thought of Susan as a millionaire for months already because her album was released in November – but she hasn’t got it yet.

“It takes time for royalties to come through. She has been told it will be there for her birthday on April 1.

“Until now her management team has made sure she never wanted for anything.

“She has been receiving an allowance from Simon which has been more than enough to live on.

“But this is her long-awaited pay day finally arriving. This is the first instalment of a very large amount of money.

“She has already looked at a few houses in Blackburn with a view of buying one when the money finally arrives.”

Her debut album “I Dreamed a Dream” broke British chart records after selling 3.1 million copies in its first four weeks of release and has now sold more than 8.5 million worldwide.

Glasgow entertainment lawyer Murray Buchanan – who negotiated Scots band Biffy Clyro’s record deal – said: “The music industry divides into two accounting periods – January to June and July to December – and it is not uncommon for artists to have to wait a further 90 days before they finally get money accrued from sales.

“Anyone like Susan – earning from sales during the second half of last year as she did with her new album – would only be receiving royalties now. It’s standard across the industry.”

Next weekend Susan will fly to Tokyo where she is due to perform to a 10,000-strong crowd on her birthday as a guest with the Yomiuri Nippon Symphony Orchestra.