Two-Jags Prescott shuns his own “battle bus” for the train 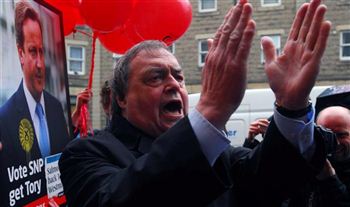 LABOUR “dinosaur” MP John Prescott has come under fire from eco-campaigners for shunning his own “battle bus.”

The 71 year-old – once dubbed “two Jags” for having two cars – brought his “Prescott Express” campaign to Edinburgh today (Friday) – but arrived in the Scottish by a train from Wolverhampton.

Quizzed over the bizarre transport arrangements he insisted he couldn’t “just nip up” on the bus because politics was “about going everywhere.”

One Labour supporter at the campaign event at an Edinburgh Tesco said: “What’s the point in him having a battle bus if he doesn’t even travel about in it?”

Asked where his battle bus was, Prescott blustered: “The bus did come up.

“But I had to come from Wolverhampton where I was speaking.

“Politics is about going everywhere.

“I was in Wolverhampton so the bus met me off the train.

“You can’t just nip up quickly.

“I’m taking the bus to Glasgow and I’m going back on the bus.

After meeting voters, Prescott then had to be shown to the bus by Labour aides, parked a few streets away.

“His actions speak louder than words”

He marched photographers to the van where he posed in the driving seat, before leaving it behind for another engagement.

He said: “If the Labour Party are going to go to the trouble of hauling their so-called battle bus up to Scotland, the least they could have done was have the old battle axe travel in it.

“John Prescott may never tire of spouting hot air about the environment, but his actions speak louder than his words in this regard.

“It’s no surprise to see Labour rolling out the dinosaurs in Scotland for the election campaign, but voters should remember that they have another choice than to vote for the parties of Westminster sleaze and that Green candidates will be standing for Westminster in many Scottish seats.”