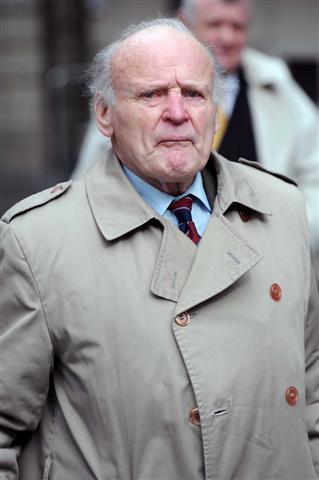 Chartres Baillie was accused of dangerous driving last year on the A720 Edinburgh city bypass.

But today (Friday) it emerged the case could be thrown out of court after he offered to surrender his driving licence.

Prosecutors agreed to reconsider taking the OAP to trial on the grounds he never gets behind the wheel of a car again.

The former Army Major said he was “very pleased” that there was a prospect he would not have to go to trial at Edinburgh Sheriff Court.

He said the crash on March 28 last year was “just another distant memory.”

He described leaving a garage at the Dreghorn junction and turning west into eastbound traffic.

He said: “I don’t remember much about what happened.

“I turned right out of a filling station and the sun was very bright.

“I remember being hit by another car and then the police came.

“Apart from speaking to police, who were very nice, I’m afraid it is just another distant memory for me.”

Mr Baillie, who was born in 1919 and lives in Dollar, Clackmannanshire, said he was happy with how his court appearance had gone.

He added: “It is good of them to do this.

“I will be very pleased if I don’t have to come back.”

He was due in the dock last Monday, but “got confused” and failed to show up according to his lawyer Jim Grant.

Mr Grant told Sheriff James Scott: “He wasn’t here on Monday because he simply got confused about the dates.

“If that is agreed, my motion is for there to be a notional trial diet then I will prove to the court that his licence has been surrendered.”

Fiscal depute Aidan Higgins agreed, saying: “I have no problem with that.”

On being told he could leave the dock, Mr Baillie saluted Sheriff Scott.

Mr Baillie was released on bail and must return to court on 7 May.