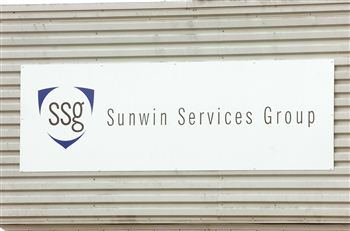 A MAJOR police investigation is underway after thieves broke into a high security depot and made off with £235,000.

The thieves are believed to have used keys and pass codes to gain entry to the Sunwin Services building, part of the Co-operative Group, in Broxburn, West Lothian.

Lothian and Borders Police are appealing for anyone who may have witnessed the heist on Friday night between 8pm and 10pm to come forward.

Sunwin Services Group, which is based in Bradford, deliver and collect ATM cash, paperwork and company documents for firms across the UK.

They are now investigating how the thieves were able to get into their premises, known for its high security.

Staff from nearby tyre firm R&J Strang were working around the time the heist took place.

Worker Declan Henderson said: “We supply the tyres for their trucks and our guys are in there all the time.

“Security is very tight and you can’t walk anywhere in there without being on camera so whoever done it must have known this and how to sort that out.

“There is usually activity there until about 10pm and I think there’s usually engineers there all the time for call-outs in case they need to fix the ATMs, but you never see any vans at that time of the night.

“I received a phone call from head office on Sunday asking if our CCTV cameras were operational but they aren’t, then I saw some CID officers at the building who paid me a bit of attention when I passed.

”We’re a 24-hour service and someone is here all the time, but no-one has even questioned is about it.”

Another worker added: “We’ve all been inside and there are two security doors that you can’t get in or out of without the other one.

“They probably wouldn’t have even needed to use a van or anything because you could probably fit a quarter of a million into a suitcase if it was bank notes for ATMs.

“It’s a bit of a shock to hear what’s happened and how much money is involved.”

A spokesman for Lothian and Borders Police said: “Police are investigating the theft of a six-figure sum of money from a business premises in Broxburn.

“The theft happened sometime between 8pm and 10pm on Friday.

“Inquiries are ongoing and anyone with any information should contact the police immediately.”

A spokesman for Sunwin said: “We confirm that an amount of cash was stolen from our Broxburn depot on Friday evening and we are co-operating with the police in their investigation.

“We are undertaking a full review of our security following the incident.”