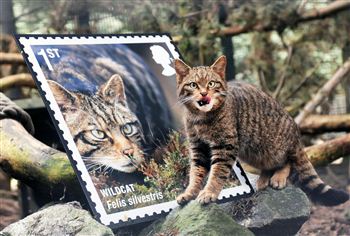 ONE of Scotland’s most reclusive species is to become a regular sight after it was chosen to feature on a new special edition collection of stamps.

The Highland Tiger is the latest creature to be featured in the Action for Species series, which highlights the plight of Britain’s most endangered mammals.

Scottish Wildcat Seasaidh, who is pictured on the stamp, is one of just 400 of the creatures remaining in the wild.

The three-year-old, who lives in Highland Wildlife Park near Kincraig, Inverness-shire, is currently the focus of a campaign to protect his species from extinction.

Ian McKay, Royal Mail’s Scottish director, said: “These stamps allow us all to have our own collection of miniature mammals including the Scottish Wildcat.

“They will also deliver an important conservation message through millions of letter boxes, highlighting just how important it is to safeguard the future of the diverse range of mammals which inhabit the UK and its shores.”

The Scottish Wildcat is one of 80 species of mammals which live in the UK, many of which are threatened by domesticated animals and humans.

The Cairngorms Wildcat Project was set up to protect the Highland Tiger while enabling it to remain in the wild.

The project hopes to persuade cat owners to neuter their pets so they cannot mate with the wildcat and leave the creature in its natural habitat.

Dr David Hetherington, Cairngorms Wildcat Project Manager said: “The wildcat is such an iconic animal for the people of Scotland but sadly is now seriously endangered.

“However, if everyone pulls together, for example by making sure their pet cats are neutered and vaccinated and by reporting wildcat sightings, I’m sure we can save our Highland tiger from extinction.”