THE parents of a hero soldier who was killed in Afghanistan are to meet the Queen as facilities at an army base are named after their son. 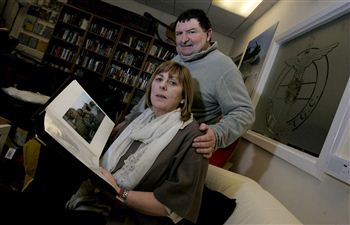 Mark Wright was just 27 when he was killed while trying to save the lives of his fellow soldiers on September 6, 2006.

Corporal Wright was killed while on duty with the 3rd Battalion, Parachute Regiment, in Helmand Province.

The Dalkeith man was posthumously awarded the George Cross for gallantry and his parents, Bobby and Jem, have set-up a charity for the families of the servicemen and women in his name.

Now the couple are set to meet Her Majesty as the monarch opens a new building at the MOD’s Joint Permanent Headquarters in Northwood, London this week.

The Queen will open a new building which includes conference rooms named after Mark on Thursday with Bobby and Jem recently receiving a letter confirming the honour.

Bobby, 64, said: “About a year ago I got an e-mail from a flight commander who told me what was happening in Joint Command Centre, that it was getting done up, and he asked if it would be OK to use Mark’s name for some of the conference rooms.

“I said yes, of course, and he asked if I’d be prepared to come down, and then we just got an invitation card through.

“We felt over the moon. We’d prefer for him to be here, but we are very proud.”

Former hairdresser Jem, 58, added: “We’re excited, we knew that they were going to name something after Mark, so it’s really good to go down for the opening. We’re just honoured that they called them after Mark.”

The Mark Wright Project, based in Dalkeith, has been instrumental in supporting the families of the 30 soldiers who lost their lives during the 3 Rifles Battle Group’s six month tour in Afghanistan which came to an end last week.

They have helped encourage businesses to arrange a VIP reception of accommodation, travel and food for the bereaved families during the homecoming parade on May 8.

Lothian Buses have promised to lay on an 80-seater coach to transport the group.