Election countdown is on as Salmond rallies troops 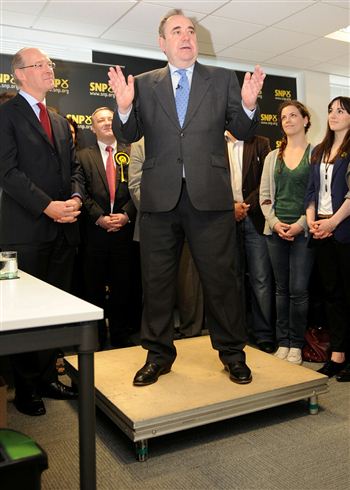 ALEX Salmond got up on a soapbox to rally his SNP troops ahead of a frantic last few hours of canvassing today.

He made a tub-thumping speech to activists at the party HQ in Edinburgh while standing on a tiny stage.

The First Minister said Labour were “finished” as a government, urging his party staff to hit as many doors as possible in the final few hours before polls open.

He said: “Only the SNP can protect this country from the London parties, none of whom put Scotland first.

“Labour are finished, while the Tories are arrogantly saying they can rule with no Scots MPs and the Lib Dems are ready to do a deal with David Cameron.”

The SNP campaign team are making 100,000 telephone calls to supporters in key seats and delivering the last of 250,000 letters to target voters. 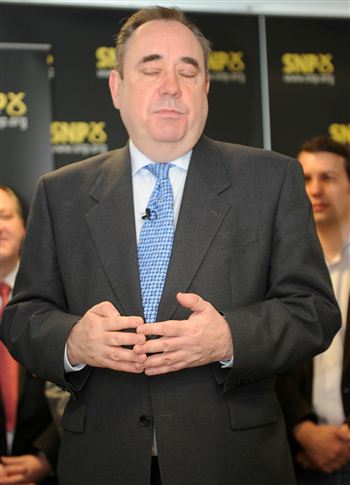 Salmond also squeezed in visits to Falkirk and Dundee West to support his candidates, dubbed “national champions” by the party.

He said: “Scotland needs champions – now more than ever before.

“It is too late to save Labour but on polling day we can vote to save Scotland from the worst impact of a Tory or Tory-led government.

“The final poll of the campaign shows the SNP pulling clear in second place in Scotland as the focus has shifted away from the air war and onto the ground battle at which our activists excel.

“The last thing Scotland needs is to wake up on Friday morning without protection from the London agenda of cuts.

“That would represent an electoral hangover of historic proportions.

“That makes this election the most important in a generation of Westminster contests for Scotland.

“Only a strong bloc of SNP local and national champions will stand up for Scotland, putting the interests of their communities and this nation first.

“Scotland can be the winner, with a strong vote for the SNP.”