THE mum of a toddler who plunged to his death in an Edinburgh office block has welcomed a sheriff’s findings over the tragedy. 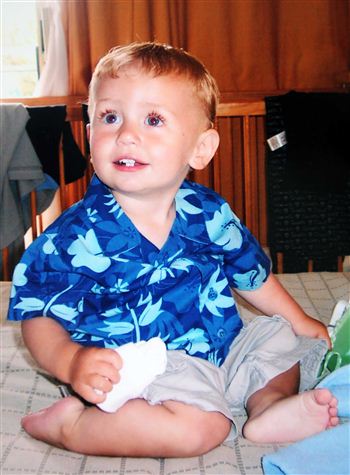 Louise McCreath, 34, she was “content” that Sheriff Mhairi Stephen had recommended that building laws were tightened up.

Ben McCreath was just 21-months old when he squeezed through a 15cm gap between a safety barrier and a wall, falling almost five metres in the fatal accident.

The tot had been exploring on the first floor of the Princes Exchange in Edinburgh’s Earl Grey Street on February 14, 2006.

His mother Louise – a part-time receptionist at the building – was having a meeting with bosses and had brought Ben along at the time of the tragedy.

She watched in horror as the youngster fell 4.74m to the ground floor of the building.

Ben later died as a result of head injuries suffered at the Royal Hospital for Sick Children.

In her written determination Sheriff Mhairi Stephen called for a shake-up of building regulations to ban all new structures from having gaps of more than 10cm.

Speaking from her home in Penicuik, Midlothian, Louise said: “The best way to describe it would be to say I am content with it.

“Happy and delighted are the right words but wrong in this context.

“Content is the best outcome we could have hoped for in this situation.

“If anything comes out of this that prevents it happening to anyone else then Ross and I are extremely proud.

“It is closure for the family. This has been going on for four years now and it has helped in a way that that is it finished.

“You are always thinking of Ben, he was our son so we are always going to be thinking about him.

“He was only 21 months old and he has made such an impact through this, more than I have ever made at 34. That makes me very proud as a mum.

“It doesn’t make it easier but it gives his death a purpose.

“I would give anything to turn back the clock but some days you have to think how proud you are of him, because of Ben nobody else will every go through this.”

Ben’s death saw regulations surrounding buildings tightened and current legislation states that any gaps between protective barriers in non-domestic buildings where children are likely to be are no more than 10cm.

And Sheriff Mhairi Stephen called for all buildings to be included in the 10cm rule – which would be too small for a child’s head to fit through.

Sheriff Stephen said that it was difficult to say where children are likely to turn-up and added that designers would have to show “exceptional circumstances” to break the rule.

She said: “Although the 100 mm rule did not apply to this development evidence was led regarding the rule; its application and the modifications to the legislations since 1998 and since Ben’s accident.

“Since 1 May 2007, and substantially as a result of the tragedy which befell Ben, the 100 mm rule applies to all buildings in which ‘the presence of children is anticipated’.

“The qualification is not only subjective but it is now almost impossible to gauge with any certainty how the presence of children can be assessed.

“However the lesson of this tragedy is that even supervised children are at risk when gaps of greater than 100mm exist whereas all children and therefore all adults are protected if the gap is restricted to a maximum of 100mm.

“The uncertainty built into the current building standards is unwelcome. It is desirable to have a measure which is both clear and unequivocal and it will have the effect of protecting the smallest and most vulnerable in our society.”

Sheriff Stephen said that no blame could be applied to Louise and offered her condolences to the bereaved family.

She said: “Sadly the reality is that small children make it their business to run away from and escape a parent even when supervision is very close. The fact that Ben ran away does not infer that his mother’s supervision was lacking or lax. Children pull away, wriggle and explore.

“No criticism of Louise McCreath’s supervision of Ben is made or implied. This was a terrible tragic accident and my deepest sympathies are conveyed to Ross and Louise McCreath, Ben’s parents and other friends and family affected by Ben’s death.”

Sheriff Stephen made no recommendation on whether the rule should be applied to existing buildings.

The determination was published following a Fatal Accident Inquiry at Edinburgh Sheriff Court in January this year.

During the emotionally charged inquiry, Ben’s mum broke down as she recalled the incident, and how the last thing he did before falling was chuckle.

Louise, a part-time receptionist for the NHS said that she and husband Ross, 40, will always remember their son as being “fun”.

She added: “The way Ben died was exactly who he was – mischievous, always on the go. He was just a typical wee boy who loved just having fun, loved to play, loved being involved.

“He was just so much fun to be around and we will never forget him.”