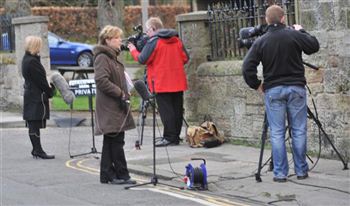 MICROPHONES dropped down toilets and tarmac damage caused by Top Gear are among £1million of insurance claims paid by the BBC in the past thee years.

Compensation payouts for hundreds of incidents have cost the broadcaster the equivalent of more than 6,700 people’s TV licence fee payments.

The bill includes £9,000 paid to extra who fell from the crow’s nest of a ship during filming of a period drama, £8,000 for road damage caused by the Top Gear team and £2,000 to a museum after a film crew knocked over a marble plinth.

The large bill was revealed in documents released under the Freedom of Information Act at the weekend.

A voice-over employee got £950 compensation after chipping his tooth on a microphone when someone bumped into his chair.

And a female employee who ripped her skirt and tights on a fire hose cover got £150.

In total, there were 738 claims in the three years to 30 March, for which the BBC paid out £986,268, although that figure is expected to rise as many claims are yet to be settled.

Compensation of £250 was given for radio microphones and mobile phones dropped into toilets and £30,000 damage caused to a petrol station.

Other payments included £3,606 for a snapped double bass bow, £13,800 after a lorry reversed into cathedral gates and £350 after a production crew allegedly unplugged a freezer spoiling frozen game meat.

An actress caused £677 of damage when she dropped her microphone into the sea “while bending down to pick up some shells.”

Matthew Elliott, of the TaxPayers’ Alliance, said: “The BBC must be careful not to waste money.

“Of course anyone who is genuinely harmed should be compensated, but many of these claims are things people would have shrugged off in the past.”