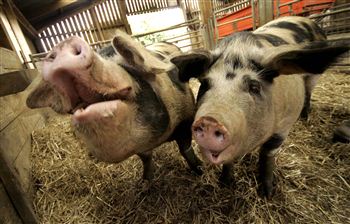 TWO unlikely TV stars have had their bacon saved and found a new home at a heritage centre in Livingston.

Smokey and Streaky got their first taste of fame as cute little piglets on the BBC TV show Monty Halls’ Great Hebridean Escape where the presenter reared them to be eaten on New Years Day.

But Monty became so attached to the pair of Gloucester Old Spot pigs that they were spared the butcher’s block.

Programme makers approached Farm Manager Carol Burke at Almond Valley Heritage Centre to see if she could provide a home for the pair.

Carol was happy to oblige, and the pigs have made lots of new friends, of the human and animal variety.

Carol said: “We had a bus load of school kids visiting, and their teacher had seen the TV show, so when the kids saw the pigs we had 80 children shouting, “There’s Streaky and Smokey.”

They have proved to be a popular attraction with visitors, who are encouraged to brush the pigs’ backs.

But visitors better not get too close, as the animals are short-sighted and likely to mistake a finger for a tasty morsel.

The porkers had to spend two weeks in quarantine before they were allowed to make their home with the other animals at the centre.

Once installed in their pen, they immediately began carrying buckets of water out to the paddock to make their own mud bath.

The other animals have taken to their new friends after some initial reluctance.

Carol said: “We have a Clydesdale foal called Dora who was terrified of the pigs when they first arrived, she wouldn’t even come in for her dinner when they were around.

“But she is fine with them now, she doesn’t even bother.”

Smokey and Streaky are now quite at home among the goats, cows, sheep and horses at the Almond Valley centre.

The pigs are very playful, as Carol explained: “We will chuck in old broom heads and they will throw it around like a football and play with it.”

As piglets on the TV show, they captured hearts with their cute antics.

They made friends with Monty’s dog Rueben, and treated the pooch as their mother.

Now they are nine months old and have grown to weigh around 25 stone each; not quite as cute, but still bitten by the celeb bug as they fight for attention from visiting fans.

Carol said: “They are great characters, they love to have their bellies rubbed and their backs scratched.”