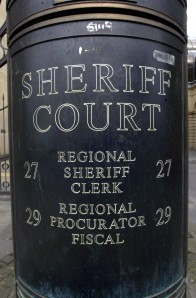 THREE people have appeared in court following an alleged baton and scissors stand-off at a barber shop in the heart of Edinburgh.

Police were called to Alfie’s Barber Shop in the capital’s Fleshmarket Close on Thursday afternoon.

It is claimed a barber at the shop hit a man with a baton while he and a woman attacked the crimper with a pair of scissors.

Today Francesco Fortucci, 34, appeared from custody at Edinburgh Sheriff Court charged with engaging in a fight with Scott Callachan and striking him with a baton.

Callachan, 34, appeared along with Vicky Fraser, 45, charged with assaulting Fortucci and brandishing a pair of scissors at the barber, who cuts hair in the shop.

It is alleged they kicked and punched Fortucci while both are also charged with having an offensive weapon – the scissors – in a public place.

Fraser is also alleged to have resisted arrest and obstructed police officers in their duty during the incident, around 5.15pm.

All three pled not guilty to all offences and each was granted bail by Sheriff Isabella McColl.

Fraser and Callachan, both of Roseburn Gardens Edinburgh, were released under the condition that they do not enter Alfie’s Barber Shop and they were ordered to stay away from Fortucci.

Fortucci, of Eltringham Gardens, Edinburgh, was released on standard conditions.

Dates were set for trial later this year.

Lothian and Borders Police said they were still looking for witnesses to the alleged disturbance.

A spokesman for the force said: “We are appealing for anyone who was in the area at the time, who saw any sign of a disturbance breaking out to come forward.”