A BLUNDERING learner driver caused dozens of residents from a street called PARK Terrace to be evacuated – when she drove into the side of a house during a botched three-point turn sparking a gas alert.

The woman driver’s prang burst a water pipe, flooding the street, and caused a gas pipe to rupture sparking panic. 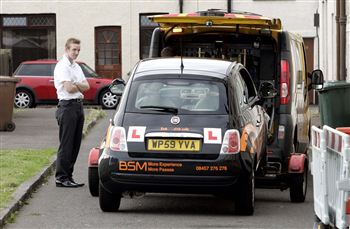 Fire-fighters were scrambled to the scene and were forced to put out a birthday BBQ party quickly across the road for fear of explosion.

They later apologised for spoiling the party, but residents insisted the student driver was to blame for “lurching forward.”

Both the learner and the BSM instructor escaped unscathed and abandoned the Fiat 500 Pop car before fleeing to safety.

Around 30 people from all eight terraced houses were ordered out of their homes and sent to the local primary school in Edinburgh’s Newcraighall while gas engineers wrestled with the burst pipe.

The motor was emblazoned with the slogan: “More experience, more passes.”

But one bystander said: “If she’s on her test I doubt she’s passed.” 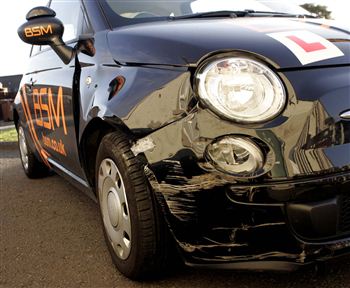 Workmen then had to dig up the pavement to completely cut off the gas and stem any risk of further damage.

One of those evacuated from Park Terrace was Newcraighall Primary School cleaner Caroline Leslie, who opened up the building for her neighbours, many of whom were elderly.

The 53 year-old said: “I heard a bang then saw all the emergency services and thought ‘oh my God this is quite serious’.

“A firewoman came to my door saying everyone had to get out.

“I didn’t see the driver but she got something very wrong hitting that house.”

She said firefighters were scratching their heads over where to send people.

Caroline, who has worked at the school for 17 years, said: “Most of the people here are elderly and I didn’t want them standing outside all night or trying to find somewhere to go.

“I just thought if you’re able should you help others, so I took everyone over to the school and made them all tea.

“The whole street was taped off by police – it was quite dramatic considering it was all started by a learner driver in that wee car.

“Even the BBQ over the road had to be put out which was a shame but the firemen were just saying safety first.”

Another neighbour said the crash left them bemused.

June Sipton, 66, who lives close to the accident said: “How they’ve driven into the wall I’ll never know but I bet they won’t pass their test now.

“It’s not that wide a road but they managed to mount the kerb and knock the pipe out the wall.

“If she’s on her test I doubt she’s passed for lurching forward into a wall.

“The water was gushing up into the air and the whole street was flooded.”

The black three-door hatchback was showing damage on its front driver-side bumper when collected by the AA yesterday morning.

A BSM spokesperson said: “During a driving lesson yesterday evening, an accident occurred during a routine manoeuvre which resulted in the car mounting a narrow pavement.

“A plastic gas pipe was knocked in the incident.

“As a precautionary measure the street was evacuated.

“No one was hurt and the instructor remained at the scene until people were able to return to their homes.”

They said they could not reveal the woman’s identity because of the Data Protection Act.

Lothian and Borders Fire and Rescue Service confirmed they had sent residents to Newcraighall Primary School at around 8pm on Tuesday.

They fixed the water leak while Scottish Gas Networks dealt with the broken gas pipe.

A spokeswoman for the fire service said: “It was an unfortunate incident for the learner driver but our crews were on the scene within minutes and quickly isolated the gas.

“Their quick response of the emergency services meant the only downside was for the neighbours who were having a BBQ which we advised had to be put out for everyone’s safety.

“We apologise for that but obviously safety has to come first when gas and naked flames are involved.”

A Lothian and Borders Police spokesperson said: “The fire service evacuated about 30 people from the 12 flats in Park Terrace.

“They were taken to the local school and allowed to return after 9.15pm.

“We assisted by closing the road while the situation was made safe.”

Scottish Gas Networks said they had to dig a hole in the pavement to completely shut off the gas supply.

A spokesman said: “All the residents had been evacuated before our technicians got there.

“They very quickly made the situation safe before excavating the footpath to completely isolate the supply.”