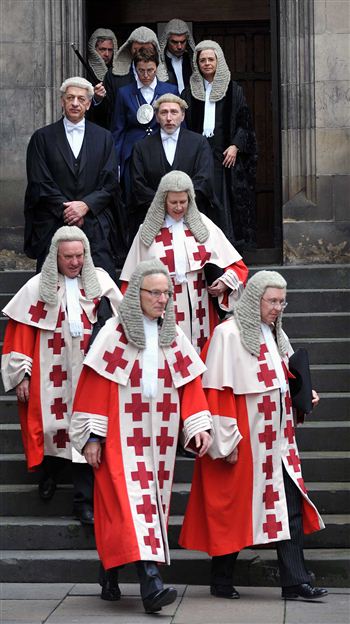 SHERIFFS in Edinburgh lost their battle to reshift the pecking order of a traditional procession which signifies the new legal term, and in turn refused to turn up.

Each year, judges, sheriffs, and advocates take to the streets of Edinburgh and make their way from the Supreme Court to St Giles Cathedral for the annual ‘Kirking of the Court’ ceremony, where they attend a service to be blessed for the new legal session.

Traditionally, advocates follow judges in the procession, but this year sheriffs were hoping to be pushed up the rank ahead of them.

The group of between 10 and 20 sheriffs followed through with their threat to boycott the event today, after they were refused the right to walk behind the judges.

Dressed in their wigs and robes, around 15 judges led the group of over 100 advocates, who were joined in Parliament Square by the Writers to the Signet, as they made their way into the cathedral for a 15 minute service held by the Minister of St Giles, Gilleasbuig Macmillan.

Sheriffs had made a plea to have the order reviewed as they argued they are higher in the judicial hierarchy than advocates.

But – it was believed their request had been rejected by Lord Hamilton, the Lord President of the Court of Session, and the procession of Scotland’s top law men and women went ahead without them.

The plea to overturn the long-established practice was met by a backlash from angry senior advocates.

Lord Hamilton said he had made the “difficult decision” to leave things as they were, and declared that the sheriffs were to stay in their usual spot behind the Faculty of Advocates if they participated.

He said: “I had to make a difficult decision and I am disappointed the sheriffs have decided not to attend.

“One hesitates to call them [the sheriffs and advocates] warring parties but they are in dispute.”

Last year there had been some confusion over the pecking order, as sheriffs had tried to proceed behind the judges but were allegedly blocked by advocates.

Only sheriffs from Edinburgh normally attend the event, led by Edward Bowen, Sheriff Principal of Lothian and Borders.

Sheriffs are believed to have requested the change to the ceremony after an administrative change took place earlier this year meant Lord Hamilton assumed more powers – making him the head of Scottish judiciary.

Sheriff Bowen appealed to Lord Hamilton to shake-up the practice, comparing it to the procession in England in Wales, where judicial office-holders proceed in order of seniority.

When the dean of the Faculty of Advocates, Richard Keen QC apparently objected, the Lord President was left with no choice but to make a stance – in favour of the advocates – to which the sheriffs announced they would not attend.

Justices of Peace (JPs) also boycotted the Kirking, a decision they made to show sympathy for the sheriffs.

JPs used to sit in courts runs by councils, but now operate in sheriff court buildings and answer to the Scottish Court Service.

The new legal term begins in September each year, and is marked with the service at St Giles Cathedral, where members of the judiciary are blessed.

As the judges and advocates walked alon 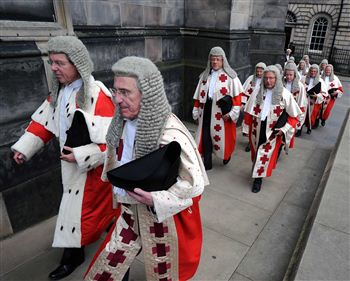 g the archway behind the Supreme Court, clad in their traditional dress, one onlooker seemed oblivious to the fact that up to 20 members were missing from the procession.

She said: “It is very nice to see them all in their full outfits, wigs and all.

“It seems to be a very special occasion.”

A spokesperson at the Faculty of Advocates refused to comment on the row, and Sheriff Bowen was unavailable for comment.