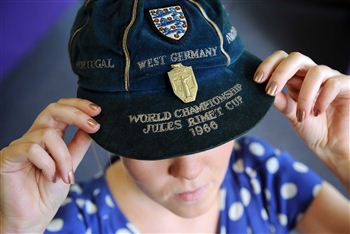 A SCOTS auctioneer is hoping to set a new world record for the sale of Nobby Stiles’ 1966 World Cup winner’s medal.

Football memorabilia of the former England player, estimated to be worth £350,000  includes the 68 year old’s winner’s medals from the 1966 World Cup final which his side won 4-2 against West Germany.

It also features his 1968 European Cup as part of the 45 lot sale won when Manchester United became the first English club to win the European Cup beating Portuguese side Benfica by four goals to one.

He is one of only three Englishmen to have won both in his career, along with, Bobby Charlton and Ian Callaghan.

“We expect worldwide interest in the auction and have already been in contact with people from Australia and Chile.

Born in Collyhurst, Manchester in 1942, Norbert Peter Stiles was awarded an MBE in 2000 in recognition for his role in the 1966 World Cup victory.

The player had an 11 year career at Old Trafford with Manchester United, where he won two league titles and a European Cup.

Stiles had intended to leave the collection to his children but found it difficult to divide it between his three sons.

He said: “They have each selected some pieces they would like to keep for themselves.”

He added: “I’m as patriotic as the next Englishman and will always cherish my memories and the friendships I made in my playing days.

“But at this stage of my life I would rather have some control over the distribution of my memorabilia and know that my family will benefit.”

Also included in this week’s auction are a number of Scottish sporting items.

The international Scotland cap for Celtic’s Lisbon Lion, Tommy Gemmell for the 1966 a match against England which saw Scotland narrowly loose 3-4 to the World Champs will be sold as lot 155 and is estimated at £800-1000.

There will also be the international cap of fellow Scot, George Cummings estimated at £500-800 from the match in April, 1939 when Scotland lost 2-1 to England.

Items of arguably Scotland’s greatest boxer, Benny Lynch, including a flyweight championship of Europe trophy will also be available to bidders.

The sale will take place at the Royal Highland Centre in Edinburgh on 27 October, and the collection will be on view from 25 October.