SCOTS comedian and explorer Billy Connolly is set to ride his Harley Davidson across the US for a new documentary to be aired next year on ITV.

The Big Yin, who has already completed a ‘World Tour’ of Scotland, Australia and New Zealand, is to drive the motor trike 2,500 miles along the historic Route 66, while stopping off in US towns and cities.

The 68-year-old will also invite viewers to learn the history of the Mother Road, which stretches from Chicago to Los Angeles and is now America’s most famous road. 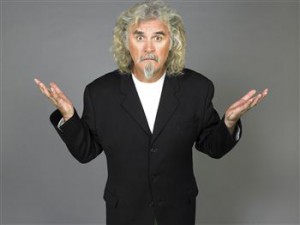 ITV Executives were thought to be desperate to strike a deal with Connolly after his Journey to the Edge of the World series in Canada last year – pulling in five million viewers.

A source said: “The bosses were delighted with the last show they did with Billy and wanted to do another project with him again as soon as possible.

“He has a real sense of adventure and jumped at the chance of doing the Route 66 trip.

“His motor trike has become quite famous and it will be great to see him travelling across America on it.

“Billy appeals to audiences of all ages and types and it’s a real coup to have landed him for the show.”

In a recent interview, Connolly revealed that he would like to increase his profile in the US because he said only ‘half the population’ do not know who he is, despite him living there for 20 years.

The documentary will start filming in spring 2011 after the Glasgow-born star completes his stand-up tour of Australia and New Zealand.

A spokesman for ITV said: “We are in advanced discussions.

“The ratings and the audience appreciation for Journey to the Edge of the World were great and we were keen to work with Billy again.”